Man City transfers: Málaga midfielder Isco confirms that he has received offers from the Citizens and Real Madrid 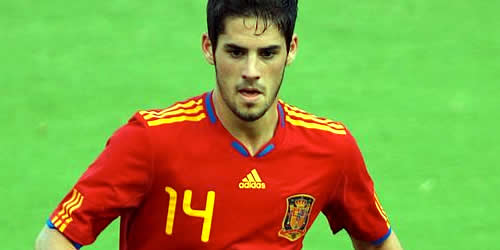 Isco says he has received offers from both Manchester City and Real Madrid but the Málaga midfielder insists he hasn’t spoken to Manuel Pellegrini.

The 21-year-old has been heavily linked with a move to the Etihad Stadium in recent weeks before Pellegrini was confirmed as the club’s new manager on Friday.

Isco has played a key role in helping Spain reach the European Under-21 championship final in Israel, and the playmaker is yet to make a decision on his future.

“Well, I have two offers on the table,” Isco told AS English.

He added: “I hope to make my decision soon although right now, I am still under contract with Málaga.

“I know that both Manchester City and Real Madrid are two great clubs. I just want the best outcome for me and for Málaga.”

Isco quashed reports that the midfielder has spoken with his former manager about a move to the Citizens but backed Pellegrini to be a success at City.

“No I haven’t spoken to him,” Isco said.

“I found out that he would be joining City on the internet at the time but he hasn’t phoned me.

“He is a great coach and I hope that it all works out for him in England. He is a fabulous coach – one who did a fantastic job at Málaga – just like he did for his previous clubs so I am sure he will do an equally good job over there.”

However, Isco admitted that the chance to work under Pellegrini was a factor to take into consideration as the Málaga star makes his decision.

“Of course, Pellegrini is someone who I already know, I know how he works and he has played a fundamental role in my career during the two seasons he was at Málaga,” he added.

“It’s a factor in favour that we have been at the same club and that I know his working methods but I would say that it would be a decisive factor.”