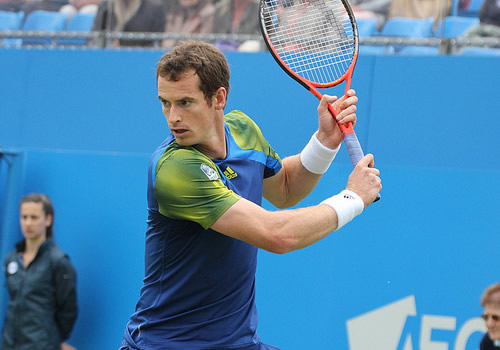 For a man who a month ago was forced to retire with lower back problems in the second round at the Rome Masters, who hastily retreated home for tests and rehab, and who then had to pull out of the French Open to continue his recovery, Andy Murray has looked in very good shape indeed on the grass of Queen’s Club.

Sure, he got plenty of recuperative practice here in the week leading up to the start of the tournament while fellow players were still pounding away on the red grit. And he has certainly been going through some long and complex stretching regimes ahead of his pre-match warm-ups. But his movement and, perhaps the biggest test of a back, his serving during his matches on the low-bouncing and slippery London grass have shown little sign of a problem.

He, along with all his fans, has been reassured: “I feel good. You know, that was what was most pleasing about yesterday was a lot of stops, starts, having to warm up and cool down and stuff. Everything felt good, and I woke up this morning with no real stiffness.

“Normally the first couple of matches here, you know, the court is quite slippy, and that’s something I have struggled with the last few years, but I thought I moved pretty well. I’ve been pretty careful with my footing, even though yesterday was tough because the court was wet. That has been a good sign, and now it will keep getting better.”

And that is good news for the two-time defending champion and 2012 Wimbledon runner-up as he approaches the sharp end of the Aegon Championships and casts his eye ahead to SW19 in a week’s time.

The conditions, though, have not worked in his favour at Queen’s. The weather extended his first match across two days and he had to play his second match within hours of the first. But he did not drop a set on his way to a quarter-final meeting with German Benjamin Becker, extending his run at Queen’s to 16 wins to four losses.

The 105-ranked German, who turns 32 in a couple of days’ time, had not reached a quarter-final since last summer, but in a good run of form he had taken out the talented Bernard Tomic, then No12 seed Lukas Rosol and finally No7 seed Alexandr Dolgopolov. He had played four tie-breakers and two 7-5 sets along the way.

So when Murray broke in the first game, this took on the look of an unequal battle, and when Becker fought off break points in the third and was broken again in the fifth, it looked as though it would soon be over.

But Murray afforded Becker a toe-hold with a loose service game in the sixth for a break back. Still the set accelerated to its conclusion as they served three love games on the bounce, Murray taking the opener, 6-4.

The signs for Becker looked even bleaker when he took a medical time out for a right-shoulder problem. Murray paced the baseline, anxious to finish the job before the sun dropped behind the clubhouse, but looks can be deceptive.

The German, despite a sequence of forehand errors and facing a break point, held his opening serve. Murray rattled through his own serve for the loss of one point and then broke Becker to lead 2-1.

But what had started as a straight-forward day at the office for Murray turned into a less-than-outstanding second set of multiple errors and breaks. Whether it was a loss of focus, the quickening wind, the low sun catching his eyes on serve, or a combination of all these factors, Murray lost his serve to love as a revived Becker chased into the net for a classy volley finish.

And it did not stop there. Becker began to reproduce the sliced backhands that had carried Hewitt to a win barely an hour before, made a glorious passing shot to hold serve, and defied two aces from Murray in the sixth game to force errors from the baseline and another break.

Becker was 4-2 up, but not for long: Murray broke at the third attempt and held serve with two more aces to level the score once more. They edged to a tie-break—Becker’s fifth of the tournament.

This time, though, the German could not pull off another upset. A couple of tired long backhands gave Murray the first advantage and a forehand error and a double fault extended the gap to 0-6. Becker rallied with three points but the result was never in doubt: Murray took the match, 7-6 (3).

The Briton was the first to acknowledge that it was not the perfect match, nor did he expect it to be:

“All the matches this week are going to be tough because I haven’t played a match for a month… there’s going to be moments in the matches where your level drops a little bit. That’s happened the last couple of matches. Playing matches and getting, I guess, match tight. I’ll avoid those slip ups. But it’s important to go through them and come out the other side of them with a win, and I managed to do that the last couple of days.”

Murray’s run on grass since he made his early exit from Queen’s last year is now up to 16 wins against just one loss—in the final of Wimbledon. And the warmth that the home crowd feels for Murray since that emotional loss—and his subsequent revenge over Roger Federer at London’s Olympics—is now palpable. The Centre Court cheered him as though he had already won his third title—and perhaps come Sunday, he will do just that.

The first man in his way is Jo-Wilfried Tsonga, who dismissed the 20-year-old American Denis Kudla in a rattling 53 minutes, 6-3, 6-2.

It is an intriguing match-up, since they have played three of their previous eight matches on grass and each has been a tough contest.

Murray acknowledged that it would be a challenge:

“It will be a big step up and also a really big test for me, because, he’s been playing some great tennis the last couple of months. He obviously had a very good run at the French Open, and he’s a top grass court player. He’s one of the best in the world on this surface.”

So while the Briton may have the wins, there is every reason to expect one of the matches of the week when they face off for a place in this year’s final.