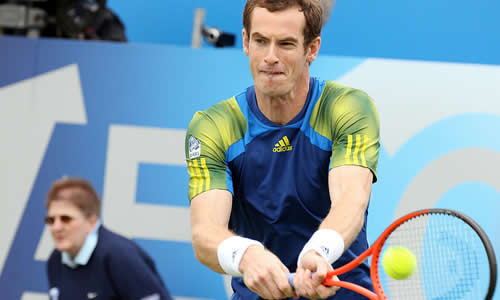 The weather had been doing it all week—with the exception of a very windy but refreshingly sunny Friday—and it did it once again on semi-final day at the Aegon Championships.

The action, scheduled to start at 1.15pm, was still on hold two hours later, and what was an irritation for fans, sponsors and those working behind the scenes must have been deeply frustrating for the four singles players and eight doubles players killing time while they fought to stay warm, calm and focused.

Not that they weren’t used to it. Andy Murray, Jo-Wilfried Tsonga, Lleyton Hewitt and Marin Cilic had all endured rain delays, deferred start times, slippery grass and unseasonably cold weather. Murray and Tsonga, both forced to play their first two matches in a single day, considered taking a nap in between the two: How they spent the time in the locker room as they waited out not just two hours of rain but the first semi-final was anyone’s guess.

But it was the 32-year-old Hewitt, the four-time former champion who had taken out seed after seed—No10 Grigor Dimitrov, No6 Sam Querrey and No3 Juan Martin del Potro—who looked most in trouble in finding his form when play finally got under way.

Playing in his first semi-final in almost a year, he took on defending champion Marin Cilic, who was an impressive winner over Tomas Berdych. Hewitt made four double faults in the opening game of the match, and after six minutes, he was broken, and so the spirit of everyone at Queen’s Club. The heaven’s opened, the tarps were out, and the players were off.

With the schedule for Sunday already advanced by two hours for fear of rain-storms—the two finals played concurrently instead of consecutively—it was vital to get the semis played in the window of sun that suddenly opened over Queen’s. And the most unusual decision was taken to move Hewitt and Cilic to Court 1 and begin Murray and Tsonga to Centre Court. Unusual, because a match once started invariably concludes on the same court.

But in truth, the Murray-Tsonga contest was the headliner from the word go, an intriguing match-up between two men who had already met on grass three times before—and each had been a tough contest.

Indeed Tsonga’s only win out of eight matches was on the hard courts of Australia five years before, but he was in a rising arc of form since taking on new coach Roger Rasheed before the 2013 season.

Murray acknowledged that it would be a challenge:

“It will be a big step up and also a really big test for me, because, he’s been playing some great tennis the last couple of months. He obviously had a very good run at the French Open, and he’s a top grass court player. He’s one of the best in the world on this surface.”

With more false starts, and clouds looming over the horizon, only quick matches looked destined to finish…or they would be back early the next day.

Hewitt and Cilic were first on court and this time the Aussie came back with more of his hot spirit. He fought off more break points in the seventh game to stay in contention but Cilic advanced to 5-3 with a love hold.

The Croat, though, came under pressure from a charging Hewitt who also served out a love game before working three break points against Cilic, but the tall No5 seed held for the set, 6-4.

He went on to break in the opener of the second, too, but when he went 15-40 down on serve after a series of outbursts against line calls from Hewitt—Court 1 has no ‘hawkeye’ to allow challenges—the normally mild Cilic could not contain himself and allowed himself a roar of anger: “No! He [Hewitt] puts pressure on you all the time!]. “

If anything, though, it focused him to play even better, rallying through long sliced rallies before unleashing a couple of backhand winners down the line, and he held.

It looked as though the Croat might run away with the set and the match as he pressed Hewitt through five deuces in the third game, but Cilic could not capitalise, and Hewitt quickly came back at him to break for 2-2 and then again for 4-2.

Cilic did manage to take a break back but the Australian secured his third break to take the second 6-4 and level the match. But the four-time champion appeared to have extinguished all his energy in the decider and he struggled to hold off the defending champion.

And the Croat hit aces number 10 and 11 to bring up match point and booked his place in a second consecutive final at the first attempt, bringing to an end Hewitt’s courageous run at Queen’s Club.

It was a large and grateful crowd that welcomed Murray and Tsonga to a surprisingly sun-drenched centre court, though both seemed to start gingerly, weighting up the grip of the court and the looseness of their bodies.

Murray was the first to earn a break chance in the fourth game but an increasingly confident Tsonga saved it and held with a couple of elegant serve-and-volley winners.

Then it was Murray’s turn to face and save break points. He saved them in the fifth game but not in distracted ninth of two doubles faults. Tsonga broke and served out the set with an ace, 6-4.

After trading blows at the start of the second set, the Briton finally made the breakthrough in the eighth game as Murray made it to 15-30 before producing a ferocious return of serve to earn a break point. With opportunities at a premium, it was the Frenchman’s loose error which propelled the home favourite to 5-3.

Murray served out the second – albeit helped by Tsonga’s backhand into the net at set point, and heading into the decisive set, the top seed looked favourite to book his place in Sunday’s final against Cilic.

And it took the 26-year-old just three games to make his big push as he raced to a 0-30 lead at 1-1, and yet another Tsonga error handed the two-time winner three break points. The French Open semi-finalist battled back to deuce but Murray finally capitalised on his seventh break point to move ahead.

It prompted Tsonga to collapse and he was broken again before the 28-year-old held serve one final time to put the pressure back on the world No2. But Murray showed no nerves as he booked his place in the final with an emphatic ace.