Queen's 2013: Andy Murray reaches the third round of the Aegon Championships with a straight-sets victory over Nicolas Mahut 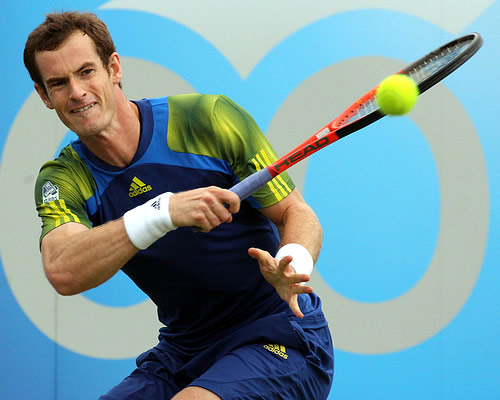 Andy Murray is through to the third round at Queen's Club Photo: Marianne Bevis

Wednesday may have started early, and the first two matches on Centre Court may have rocketed through the schedule to complete in straights sets in barely an hour apiece, but Queen’s Club could not out-run the rain.

After Lleyton Hewitt had seen off Grigor Dimitrov in 67 minutes, Tomas Berdych had to wait out the first rain delay before completing his 61-minute rout of Thiemo de Bakker, 6-1, 6-4. But he would prove to be the lucky one, able to put up his feet and return the next day for his second match.

Andy Murray, however, despite keeping up the Centre Court tempo, was beaten by the weather three times. Playing in his first match after a month’s absence with back injury, Murray was rightly reluctant to risk the cold, damp and a slippery fall: The tournament called it a day.

But the early signs were encouraging, even though he faced the same dangerous and intriguing opponent as he had at the same stage last year. That opponent was the elegant grass-court exponent, Frenchman Nicolas Mahut—all volley touch, chip-and-charge and single-handed slice—and Murray lost.

And as Murray had not played since retiring at the Rome Masters—bypassing the French Open while he underwent investigative work and rehab—this would be a real test of the state of the Briton’s physical shape and game ahead of his Wimbledon preparations.

In fairness to the 31-year-old Mahut, a finalist at Queen’s in 2007, he had also battled with a knee injury this season. His first tournament of the year was the most recent, the French Open, and he reached the final of the doubles with his countryman Michael Llodra. Nevertheless, he arrived on court at Queen’s with a knee support, and after two tumbles on the greasy grass in the first set alone, he must have been glad of it.

But Murray’s long and frequent practice sessions certainly paid off, and he read and played the low balls with confidence. He missed breaking Mahut in the very first game as a forehand went just wide, but repelled the persistent chip-and-charge attack of Mahut with ease.

The Frenchman responded to danger in the fifth game with three big serves—he hit no fewer than 14 aces in his first-round win—but Murray changed things up in the seventh to earn a break point with a delightful drop-shot-lob combo that had Mahut on the ground. Murray’s second break chance came courtesy of a passing winner from a Mahut drop-shot, and he took a 5-3 lead.

Murray deployed a near-perfect lob on this third break point in the ninth game and broke again for the first set, 6-3.

Already, there was rain in the air, and although Murray pressed on to hold the opening game of the second set, the two men retreated for an hour, returned to play one more game—Mahut resisting several deuces—and returned once more to take the score to 2-2.

So Murray and Mahut became two in a long list of players scheduled to complete Round 2 and then play Round 3 in a single day. Indeed one second-round match, and the first for No4 seed Jo-Wilfried Tsonga, had not even begun, and it was this one that preceded Murray’s.

And Tsonga’s contest with Edouard Roger-Vasselin went to three sets in one-and-three-quarter hours before Murray could return to the fray—with the hope that the still-grey and windy weather would not disrupt his first match of the day, let alone his second, which was scheduled for late afternoon.

Before Murray even began, Berdych had sailed through his second match to become the first into the quarter-finals—and with the same haste as before, a 6-3, 6-4 one-hour victory over No16 seed Grega Zemlja.

When Murray did at last make it, he was made to work hard, too, surviving several deuces in the first game to hold, while Mahut hit his stride and his serve quickly.

Murray again faced trouble in the seventh game, fighting off two straight break points to hold with a lucky net-cord. He looked as cold as the muffled spectators that began to fill the stands, but the latter stages of the set certainly warmed up.

Neither man was challenged on serve, Mahut rushing to the net, Murray controlling the baseline, until Mahut served at 5-6 down. Even then, the Frenchman withstood deuce, offering up not a single break-point chance in the set.

It went to a tie-break and now Murray, chiding himself under his breath, took a 3-1 lead, only to see it pegged back to 3-4. But Mahut could not hold off a concerted attack from Murray, who finished off the match, 7-4, almost 24 hours after he had started it.

Now the schedule had to race on, first via Daniel Evans against Juan Martin del Potro, then a repeat appearance by Tsonga against another delayed winner, Igor Sijsling, and finally back to Murray, who would take on the No65 ranked Australian Marinko Matosevic, who had enjoyed a day’s rest after Michael Llodra pulled out of Round 2 injured.

Meanwhile, Lleyton Hewitt had continued his impressive form in taking out Sam Querrey in just under two hours, 5-7, 6-3, 6-4—and is the next opponent for del Potro or Evans.

It would be a testing and taxing day, but the good news was, Murray looked—and sounded—ready for the fight: “It’s tough with the stopping and starting yesterday and then coming back to finish the today. [But] it was a good test for me and hopefully a good warm-up for this afternoon’s match.”