Queen's 2013: Jo-Wilfried Tsonga believes he is capable of beating Andy Murray on grass after booking his place in the semis 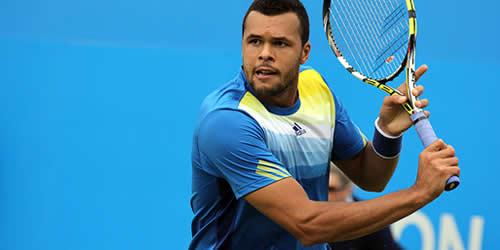 Jo-Wilfried Tsonga says he is relishing his semi-final match-up with Andy Murray after booking his place in the last four at Queen’s Club on Friday.

The Frenchman was a 6-3, 6-2 victor in his quarter-final against American Denis Kudla to set up a mouth-watering repeat of the 2011 final against Murray – a player he has never beaten on grass.

But despite the Scot leading the pair’s overall head-to-head record 7-2, Tsonga feels the rapid nature of grass-court tennis will narrow the margin between the two players during Saturday’s crunch clash.

“I’m sure I can do something,” Tsonga said in a post-match news conference. “I think the margin is not that big. On grass, every time, you know, the game can turn really quick.

“The last one I played against him here it was really close, because I was not favourite to win it. I will try to do the same thing and try to be more consistent on big points.”

Ahead of the Wimbledon championships at SW19 later this month, Tsonga admits he has always felt free at Queen’s and emphasised the importance of maximising his preparation time on grass .

“I feel free here, really,” the world No7 added. “The most important thing for me here is to play on grass, to spend time on grass, and of course when I play the semis, you know, I want to win.”

The 28-year-old’s booming forehands and thunderous first serve make him perfectly suited to London’s finest courts, but Tsonga insists grass is not actually his favourite surface – although he does cherish the opportunities it brings to vary his game.

“Grass is not my favorite surface. I never call it like this,” he stated. “I always said that I like to play on grass because I can play tennis that I cannot play on other surfaces.

“I can play some serve and volley, I can do some trick shots, I can play a different game. But, you know, I like to play tennis, and that’s it – whatever the surface.”