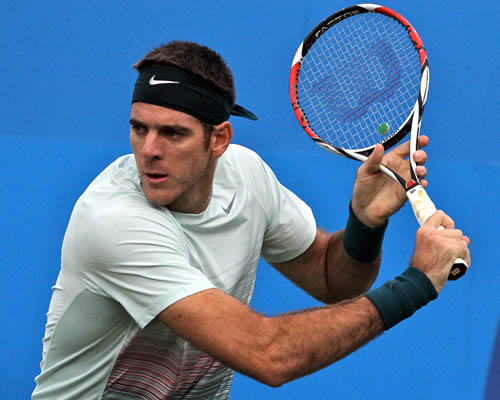 With leaden skies threatening to put a dampener on the already lush and sappy grass of Queen’s Club, there were more than a few fingers crossed that the bulging schedule would make it to the bitter end.

In the event, all the luck in the world was not enough, as the rain started almost as soon as the tennis had.

The day was expected to showcase three former champions. The last match onto Centre Court should have been defending champion Marin Cilic against countryman Ivan Dodig. The No5 seed, a doubles win already under his belt with Juan Martin del Potro, would no doubt have been fully aware of the tough road Dodig had already trod at Queen’s, coming through in three tie-breaks against Briton James Ward just 24 hours before.

Cilic had also lost their recent match last month in Munich. The sooner he could play a no-doubt sore compatriot, the better, but he was out of luck. At least the two of them knew by tea-time that they would not play when a revised schedule was released: They could go home.

Another champion, boasting no fewer than four titles here, was sure to be the highlight of the afternoon: Lleyton Hewitt took on last year’s semi-finalist, Grigor Dimitrov—though with every passing hour, their chances also became increasingly slim. As the light faced towards 7.30pm in the evening, the announcement flashed up around the grounds: Their match was postponed to the following day.

Still one champion did make it through—and largely because his was the first match of the day. It featured the 2010 titlist, American Sam Querrey, who was hoping that this cool and grey day would tick off his 200th career match-win against Slovenian Aljaz Bedene.

No6 seed Querrey, still only 25 despite playing in his sixth Aegon Championships this year, was also a semi-finalist last year, and was newly back into the top 20 after dropping to 77 a year ago. But he would be taxed to the limit, by both the weather and his opponent.

The match, which started at 12:46pm, was suspended four times as light drizzle came and went across west London. It ended just four minutes short of 6pm. But even setting aside the repeated delays, Querrey was on court for 2hr 27mins before he survived the man who had only one grass-court match to his name: His win over Paul-Henri Mathieu the day before.

So under the still-grey skies, as the hour clicked to 6pm, it was left to del Potro to send the patient and still-plentiful crowds home with a smile on their face.

The tall Argentine, a previous Grand Slam champion on the hard courts of New York and a semi-finalist on the clay of Paris—and this year the title-winner on the indoor courts in Rotterdam in a strong start to his 2013 season—had not found grass to be a happy hunting ground. Del Potro has never got beyond the fourth round at Wimbledon—though he did win the bronze at the Olympics last summer—and he had not had great success on Queen’s low-bouncing, slick grass in his previous two visits, managing the third round in 2011.

What made matters worse for the power-player from Argentina was that he had to cope with the Queen’s grass in the kind of cool, windy and damp conditions that would challenge the most accomplished grass-court player.

And then he was facing a man who, indeed, had such accomplishments, the veteran Xavier Malisse who, the stats proclaimed, ranked sixth among active players in grass-court match-wins.

But the biggest test came in the man himself. After almost a month away from tennis to recover from respiratory illness—his last match was in the third round of Rome—this marked del Potro’s testing return.

He has, however, worked hard over the last year on his front-of-court game, his volley skills and his sliced backhand, and they took him—just—to a one-set lead as he edged a tie-break.

But a loss of concentration in the second, combined with some great touch play from Malisse, saw the 32-year-old Belgian run away with a lead as del Potro overhit his forehand or found the net time and again. Malisse levelled the match, 6-1.

When del Potro was broken on his opening service game, Malisse looked admirably calm, using the conditions to his advantage and soaking up the frustration from the other end of the court. The Belgian led 4-2, but del Potro dug in, started to find weight and depth of shot from the baseline and roared himself on as he broke back to level, 4-4.

With a hold of serve, he broke again to serve for the set, but Malisse was not done: He went 40-0 up, then earned a fourth break point at deuce. However, the toughness of the Grand Slam champion rose to that final challenge, and del Potro held for the match, 7-5.

He is schedule for his next doubles match late tomorrow: He won’t be holding his breath.

There were, fortunately, some further matches completed on other courts around Queen’s, with Feliciano Lopez and Richard Berankis suffering the same delays on Court 1 as Querrey had on Centre Court. That, too, went the distance before qualifier Lopez advanced, 3-6, 6-3, 6-4.

Eleventh seed Julien Benneteau and fellow Frenchman Adrian Mannarino each hit seven aces, but it was the elder Benneteau who advanced, 7-6(7), 6-3.

There was same late excitement on Court 2, as fans thronged the stands to cheer on British wild card, Kyle Edmund, but from a set down, he went on to concede the second-set tie-break and make his first-round exit.

– No13 seed Jarkko Nieminen beat Ryan Harrison, 6-3, 6-3: He plays Briton Daniel Evans in an early Wednesday start at 11am

– Benjamin Becker beat Bernard Tomic in yet another nail-biter, 6-4 6-7(4) 7-6(4), and in the unexpected presence of Tomic senior, denied accreditation from ATP events pending an assault charge behaviour