Queen’s 2013: Lleyton Hewitt beats Grigor Dimitrov 6-4 6-3 to reach the third round of the Aegon Championships in London 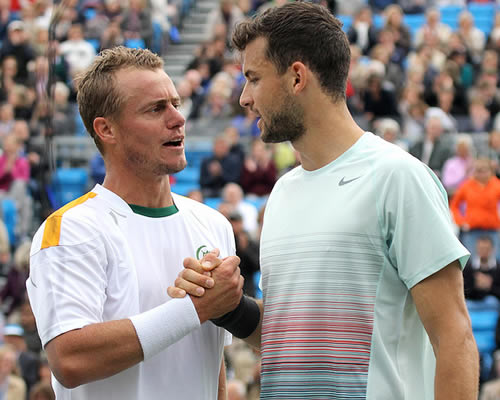 On another day of grey skies and cool winds, Queen’s was determined to make space for four-time champion Lleyton Hewitt after his match against Grigor Dimitrov had been cancelled so late on the preceding day.

So with the start of play brought forward to 11am to beat the rain, the two men separated by a whole decade in age and what would seem like a whole world of experience, took to Centre Court to face one another for the first time.

Both had already come through tough first-found matches, with Hewitt getting past Michael Russell in three sets while Dimitrov survived a final-set tie-break after Dudi Sela served for the set at 5-4.

Hewitt, though, was confident of finding his rhythm once he got used to the pace and bounce of the court: “It’s one of my favourite events.

“I have always enjoyed getting off the clay anyway and onto the grass. I have had such a good record here, as well. Yeah, most times it’s taken pretty good players to beat me here.”

He is also, of course, a former world No1 and Grand Slam champion at both Wimbledon and the US Open, while his opponent, a junior champion at the same two Slams, reached his first semi-final here last year, and still awaits his first title.

But the 32-year-old Hewitt has battled back from toe surgery and a ranking of 233 last year, and despite losing in the first round of his last three tournaments, his record on grass is Queen’s best. Among active players on the tour, he is head and shoulders above everyone except Roger Federer in match wins—112 of them—and second only to Federer in grass titles, with seven. And even the most casual observer of his first match here this year was left in no doubt that the passion still burns deep: the Ozzie “C’mon” was at full throttle.

Even so, it was hard to see him dominating the game of the young Bulgarian seemingly born to play on grass. When Dimitrov won the junior Wimbledon title in 2008 and his first match at Queen’s as an 18-year-old, his game was modelled on Federer’s, and though he has worked to shake off some of the similarities, his touch, his skill at the net, and his sliced backhand, while lacking quite the fluid movement of Federer, are still cast from a similar mould.

Now with a new coach, increasing fitness, a first Masters quarter-final in Monte Carlo, a win over Novak Djokovic under his belt in Madrid, and 10 years to the good over his opponent—not to mention the side-line support this week of Maria Sharapova—the prospects looked good for the younger pretender.

But although the No10 seed opened with a strong service game, he rarely matched Hewitt from that moment on. The Australian took to the grass as though he had never been away, clearly adjusting to the low bounce and slick surface after his couple of hours of play two days before.

He pulled Dimitrov back from 15-40 to deuce and went on to break in the third game. On his own serve, he chased down a couple of deft drop-shots, despite almost skidding over, and made a winning lob return to fend off deuce and hold for 3-1.

Dimitrov needed to do something extra, and he attacked the net rather more, and held with an ace. Not to be outdone, Hewitt held serve to love, and held again with his first ace of the match. And even serving at just 40 percent, the Australian did not offer up single break point. He took the set, 6-4, with grass-court tennis of the highest order.

Dimitrov, it seemed, could neither read the low bounce nor the heavy slice of the balls coming towards him, and Hewitt fed off his opportunities. He broke in the opening game of the second set, pressed home his advantage with two aces to hold for 2-0, and served out to 15 in the next 3-1. Dimitrov lived with him to 3-5 but Hewitt broke in the last game to love for a swift 66-minute victory—and with just 20 minutes to spare before the rain returned.

Hewitt, dressed in traditional Wimbledon white, sported his rebellious back-to-front baseball cap, just as he has always done. And he played on Queen’s grass just as he had done 13 years ago when he first won this title.

Since he last won here, in 2006, he and wife Bec have added two children to the baby they had back then. He has separated from coach Tony Roche, in 2009, and been reunited with him since 2010—and the 1966 French Open champion was with him again in London.

Roche may not be able to convert his charge to a love of clay—Hewitt only ever won two clay titles, both 250s, out of his tally of 28—but who knows what the bustling terrier with the deft grass touch may achieve over the next month in London. As he said afterwards:

“My first match here wasn’t pretty, but I fought hard and got through it. That’s what I needed to do. Then today it was a classy performance.”

It will be a test of a different kind in the next round, against another former champion here, the big-hitting Sam Querrey.

Also in Hewitt’s quarter is Juan Martin del Potro, who will next take on the perhaps unexpected name of Dan Evans. The British wild card also adapted the slick conditions with his delight of a single-handed backhand and some lovely net-attacking moves, to beat the No13 seed Jarkko Nieminen, 6-4, 6-7, 6-4.