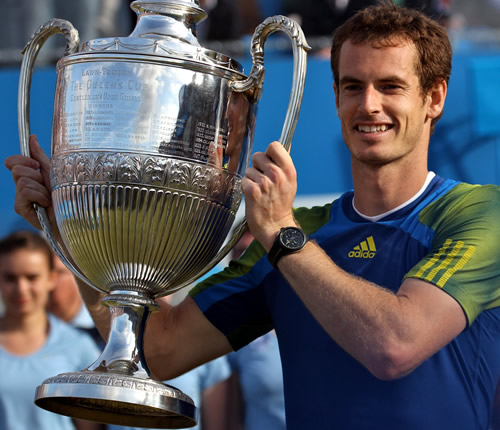 For while he may have missed his chance at the 2012 Aegon Championships, he made up for it in spades during London’s 2012 summer of sport, first reaching the final of Wimbledon then, a month later, beating the same finalist, Roger Federer, to take Olympic gold. He even rode his success on home grass to the North American hard courts, winning his first Grand Slam in New York,

And so, coming full circle 12 months later, with his feet back on grass, he has carried on from where he left off.

Already the third most successful player on grass on the tour—and top man Federer was proving his worth elsewhere on German grass—Murray quashed the injury concerns that had dogged him since pulling out of the Rome Masters with a chronic back problem.

He may have been forced to miss the French Open, but that gloomy cloud had a silver lining: His recuperation back in London saw him practising on Queen’s grass earlier than most.

Even concerns about the cold, wet weather and his four matches in three days dissipated with each passing match. Jo-Wilfried Tsonga pushed him hardest in the semis, as a Wimbledon semi-finalist and Queen’s finalist might expect to do. But after losing a tight first set, Murray put all his skill and fitness on show to defy two break points at 3-3 and swept to a 6-3, 6-2 win.

Reaching the final also edged Murray ahead of the man who has tracked him on grass these last 12 months. Because the Halle tournament is a smaller draw, Federer played only three matches to reach the German final, while Murray played four, and so the Briton headed the Swiss with 16 wins to 15—their only loss coming to one another in SW19.

Both men were also favourites to win their respective titles. Federer held a 14-0 head-to-head over Mikhail Youzhny while Murray led defending champion Marin Cilic 8-1. Murray, though, insisted his job would be far from easy:

“It will be a very tough match: He plays well here. He’s won nine matches in a row, and he’s beaten some very tough, top grass court players this week.”

He was not wrong: Cilic had beaten Feliciano Lopez, No2 seed Tomas Berdych and four-time champion Lleyton Hewitt. He had also, along the way, knocked down 44 aces to Murray’s 21.

In the end, it was three hours after the designated time that the two played their first point, but Murray looked tuned-up from the very start, breaking Cilic on his opening serve.

The Croat, though, showed the quiet reliance so typical of his play to switch the pressure back on Murray with four deuces and three break chances, but Murray survived to extend his lead to 4-1.

Against the groaning soundtrack of court covers and net posts from the adjacent No1 court as it was made ready for the doubles final, the Cilic quality continued to grow. He looked for openings on the Murray serve to attack, making some astute changes of direction and spin from the baseline to ghost in for the finish.

The smart tactics earned him two break-back points, and then a third as Murray netted a forehand.

Still the chess-like tactics kept things interesting, as first Murray went 40-15 on Cilic’s serve, and then the Croat closed it to deuce. Suddenly, though, Murray slipped over behind the baseline with a groan of pain. He eventually got up and carried on, flexing his right foot and ankle, but skidded again as Cilic wrong-footed him to hold serve.

Clearly shaken, Murray nevertheless faced down a break point at 4-4 but could not do so again at 5-5 as he saw the net cord drag a forehand out, and Cilic took the set, 7-5.

With the sun coming out to play and temperatures higher than at any time this week, Murray’s tennis warmed up too. The rallies grew longer as both men played some fine points, keeping the ball low and deep. Both tried to take the net position, and Cilic strode in boldly in the sixth game to defend break points with a couple of overhead winners.

But Murray was in the ascendancy, with two love holds of serve, and snatched a chance to break to level, 7-5.

The crowd that had taken as long to warm up as the weather was now fully behind the Briton, and he did not disappoint. He broke in the third game of the deciding set on the dot of two hours, and two love holds took him to a 4-1 lead.

This time, there were no slips or losses of concentration, and although Cilic resisted to the bitter end, the result was no longer in doubt. Murray took the victory, 6-3, along with a third Queen’s title.

It also meant he stayed ahead of that Swiss in grass court wins since this time last year, 17 of them to 16, and he takes an unbroken run of 11 of them into Wimbledon.

It was an emotional presentation ceremony of the biggest trophy in tennis, not because of the win but because Murray reminded everyone that he was about to play a charity match with Tim Henman against coach Ivan Lendl against fellow Czech Tomas Berdych.

The cause of the ‘rally for cancer’ was the Royal Marsden Hospital, which has been treating Murray’s good friend Ross Hutchins, who was watching his victory from the sidelines.

Murray, fighting back tears of emotion, revealed that Hutchins had received his last treatment just three days ago:

“My best friend over there, Ross Hutchins, he was diagnosed with cancer about six months ago, and he’s… I mean, he’s dealt with it incredibly well. He’s been so brave, and he just finished his last treatment on Thursday. So all of the money that’s raised for the exhibition match is going to go to the Royal Marsden, a charity which has helped Ross get through it.”

Murray recovered his composure, and with a broad smile added: “I honestly want to win this match more than the one we just played! I have to spend a week with [Ivan] before Wimbledon, the preparations, and if me and Tim lose to him he’s going to be all over me. I hope you guys are on our side.”

They were, and they will continue to be through the rest of the grass season and beyond. No wonder the sun came out to celebrate.

Footnote: Within minutes of Murray taking his singles victory, American twins Bob and Mike Bryan added another milestone to their remarkable doubles career with their fifth Queen’s title, to reach their 90th career title together. They defeated the Alexander Peya and Bruno Soares, 4-6, 7-5, 10-3.