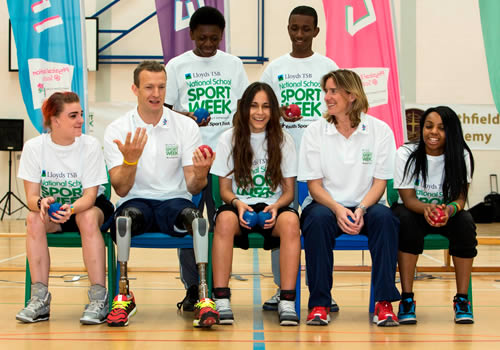 Paralympic champion Richard Whitehead has warned fellow sprinter Jonnie Peacock that he will be a marked man this summer, but is backing the 20-year-old to add World Championship gold to his London 2012 success.

Peacock announced himself on the world stage last summer when he followed up a new T44 100m world record of 10.85 seconds in July with gold in the Olympic Stadium at the Paralympics.
Since then Peacock has had an interesting few months as he tries to adapt to a new shorter blade, a new training base in Loughborough University and recover from the ankle operation he underwent post-Games.

While the Doddington sprinter has hardly raced his nearest rivals have been catching up – American Richard Browne equalling 10.85 seconds earlier this month before Brazilian Alan Oliveira broke Peacock’s record, running 10.77 at a Grand Prix event in Berlin.

But Whitehead, who won gold in the T42 200m in London, has no doubts that his fellow Briton can go even faster and triumph at July’s IPC World Championships in Lyon.

“After what happened at London 2012 and the extra emphasis on Paralympic sport; you can see that there are now more athletes involved and as a result it’s more competitive for Jonnie on the world stage,” said Whitehead.

“And Jonnie [Peacock] has some very talented South Africans in his class that will give him a run for his money – he will need to raise his performances and keep improving if he’s to continue his London 2012 success.

“But Jonnie is a star now from London 2012 and he will be eager to not let that star diminish and that means holding on to his 100m title. He has been working very hard and I know he will be trying all he can to get his achievements going.

“Jonnie has come a long way in a very short space of time and that just shows you the kind of determination and desire he has.

“He is now known though and that can make life more difficult for you as an athlete, he is a target all of sudden.”

Peacock made a winning return to action at the Great CityGames in Manchester, running 11.46 seconds in the 100m back at the end of May.

And Whitehead believes Peacock will be eager to prove he can replicate the form he showed in London elsewhere.

“Just because he won at the Paralympics, he won’t want to leave it there and he will want to push on and show that he is still the man to beat,” he added.

“He doesn’t have a world medal to his name either and he will be keen to change that and I would not bet against that happening.”