Roger Federer and Andy Murray return to grass-court action this week as the build-up to Wimbledon begins. Marianne Bevis reports 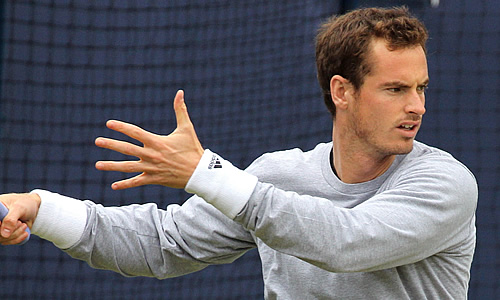 The skies may be grey, the sun rather too slow to make an appearance, but it is June, and tennis is making its most dramatic transition of the year. For just one month, the tour returns to its roots for the short, sweet but oh-so-summery season of grass.

After two months of red clay, of Mediterranean locations, of hot sun and sharp showers, of clinging dust and skidding feet, tennis turns its face to a corner of the world that remains forever green.

Of the five grass tournaments on the men’s calendar, Halle in western Germany shares the opening limelight with Queen’s Club in London, before ‘s-Hertogenbosch in the Netherlands takes on Eastbourne on England’s south coast. Then all roads lead back to London for the oldest and most traditional of the Grand Slams: Wimbledon.

Fitting, perhaps, that the two men to spearhead the green revolution in 2013 are the two who dominated it in 2012. Roger Federer and Andy Murray twice shared the main stage at Wimbledon, twice in finals, and shared the honours. First it was Federer at The Championships, then came Murray at the Olympics.

This week, they each lead the way in their separate grassy kingdoms.

World No3 Roger Federer returns to Halle 10 years after capturing his first title there. But this year, he is in the rare position of not only seeking to reclaim the title he lost to Tommy Haas last year but to win his first title of the year. Never, in all the decade since he first came to Halle, has he been without a title before he took to grass.

Federer is bidding to win Halle for the sixth time, his first since 2008. Haas is looking for his third title to add to 2009 and 2012. And in an interesting development this year, the two good friends, former champions and last year’s finalists are joining forces in the doubles.

Considering the tournament is just 28-men strong, Halle has quality in depth—even with the late withdrawal of Rafael Nadal. Federer and No9 Richard Gasquet represent the top 10, followed by new No11 Haas and, at a career-high this week, No13 Kei Nishikori.

Federer is drawn to meet either the in-form Haas or No15 Milos Raonic in the semis, but it is a half packed with talent that could disrupt his run. An interesting quarter could put Federer up against one of two young talents, Jerzy Janowicz or David Goffin, while Haas’s quarter could pose Raonic or, in a mouth-watering opening confrontation, Gael Monfils. But before that, Haas has another big test in the shape of either Marcos Baghdatis or Ernests Gulbis.

Gasquet heads the rather more straightforward bottom half on the back of an exhilarating clay-court run. The quarters are likely to offer up No33 Florian Mayer and the semis either Nishikori or another single-handed backhand finding some great 2013 form, Philipp Kohlschreiber.

While Halle may be small but perfectly formed, its bigger, high-profile sibling, the Aegon Championships in London, has the feel of a Masters event, bulging with a 56-man draw, 16 seeds and four top-eight players.

And nowhere captures more perfectly the atmosphere of the grass-court season, as the most prestigious venue with the most pristine grass of all: the Queen’s Club.

Founded in 1886 and named after its first patron, Queen Victoria, the Club was one of the world’s first multipurpose sports complexes. It is still the national headquarters of “real tennis” though its surroundings bear little resemblance to the leafy environs of Victorian times.

Nowadays, Queen’s is shoehorned into one of the most desirable residential parts of London: West Kensington. Unable to expand beyond the constraints of the surrounding houses that overlook its grounds, the venue has preserved its compact, intimate quality—and its turf centrepiece is surely one of the smallest arenas on the ATP circuit.

Not for Queen’s the pre-match razzmatazz nor end-of-set music that characterise other venues. Here, traditions are preserved, the crowd quietly respectful, and the grass the best in the world. The tournament’s website proudly describes the perfection of its green sward, the mowing stripes cut to fit precisely within the white lines. There are 24 between one outside tramline and the other, and over the space in between, they also butt accurately to the centre line and inner tramlines.

Little wonder that Murray has targeted his return from injury to this home patch, the site of two previous titles in 2009 and 2011. He missed the French Open to rehabilitate a long-standing back problem, but has now spent a week practising here, and the news could not be better:

“I feel really good. I’ve had no setbacks yet, I’ve practised well for the last three or four days so it should be good. The conditions here are perfect. It’s a great setting and the Centre Court is really, really good, so it’s perfect preparation. It’s also got a lot of history, so it’s a nice one to win and do well at.”

With Novak Djokovic and David Ferrer joining Nadal in by-passing this week, and Federer playing in Halle, the highest seed after No2 Murray is Tomas Berdych, returning to Queen’s for the first time since his 2005 debut:

“Even though it’s a long time since I played there, I still remember that beautiful club very well. I have to say that I have never played on a better grass court.”

His potential semi-final opponent is Juan Martin del Potro, who missed much of the clay-court season due to a respiratory illness. Indeed, he was overtaken in the rankings this week by Jo-Wilfried Tsonga, now world No7 on the back of his best-ever run at Roland Garros—he beat Federer in the quarters. Tsonga has a good record on grass, too: He was finalist at Queen’s in 2011 and has been a semi-finalist at Wimbledon for the last two years.

Other talent in the del Potro—Berdych half are Grigor Dimitrov, Marin Cilic, Julien Benneteau and the veteran Lleyton Hewitt, who won the first of his four titles here in 2000.

Tsonga is Murray’s potential semi-final opponent, though the Briton may face the Frenchman who upset him here in his opening match last year, Nicolas Mahut—at the same stage in the draw. Also in his quarter are Bernard Tomic, Michael Llodra and Alexandr Dolgopolov.

Murray is not the only British interest at Queen’s.

Ed Corrie and 18-year-old Kyle Edmund make their first appearances in the main draw of an ATP tournament as wild cards. Corrie has reached five Futures finals this year, winning three titles, to rise to a career-high ranking of No325. Edmund has made strides of his own in the senior game, while also performing well in the juniors.

Another wild card, Dan Evans, comes to Queen’s on the back of a victory over American Ryan Harrison in Nottingham, and has already won his first-round match in London. He could face Harrison again in the second round if the American beats No13 seed, Jarkko Nieminen.

James Ward completes the British line-up in the singles draw, while Colin Fleming and Jonathan Marray are No5 seeds in the doubles.

Qualifier Jamie Baker was beaten by No9 seed Benoit Paire in the first round.