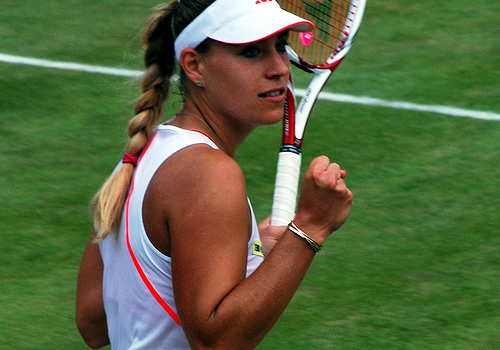 Angelique Kerber hailed Kaia Kanepi’s resolve after suffering a shock second-round loss to the Estonian at Wimbledon on Friday.

Despite a comfortable start to the match, the number seven seed fell to a 6-3, 6-7 (6), 3-6 defeat by Kanepi – who also beat Britain’s Tara Moore in the first round.

And Kerber admits she was powerless to stop her in-form opponent, especially during a final set in which she played an “unbelievable” level of tennis.

“In the third [set] she was playing unbelievable and I couldn’t do anything,” Kerber said in her post-match news conference. “I had my chances in the second set but I didn’t take them. Well done to her.

“Maybe I could play a little bit more aggressive on one or two balls, but she played good in the important points. Also maybe in the couple of the first games in the third set where she broke me 2-0.

“[I knew] that she had a good serve and I need to try to move her a little bit. But it was not easy because she has very deep balls.

“I think I tried my best and I was fighting until the last point. Like I said, she was playing unbelievable in the third set and I couldn’t do anything. This is tennis.”

The German’s clash had to be carried over from Thursday after rain had stopped play but she refused to make excuses, insisting the weather did not play a significant part in her demise.

“The court was good. Of course it’s not easy to wait two days, but for her it was the same,” Kerber added.

“We knew this before we coming here because it’s London and the weather can change from one hour to the other. I think this was not the point why I lost today.”

Estonian Kanepi will now play Alison Riske of the USA in the third round.