Wimbledon 2013: Grigor Dimitrov, Novak Djokovic and Juan Martin del Potro are all in action at The Boodles in the build-up to SW19 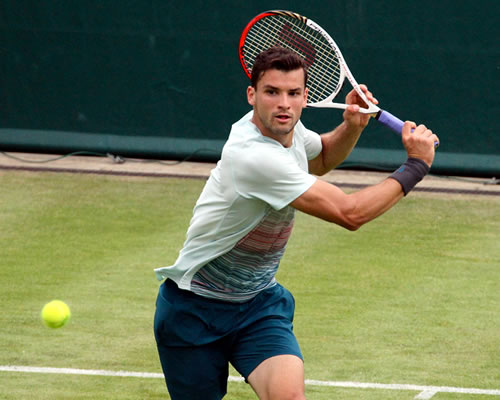 Grigor Dimitrov in action at The Boodles Photo: Marianne Bevis

With the grass-court season just one week old, the major host of tennis’s green season has already celebrated one home-grown champion.

Andy Murray heralded the all-too-short swing of racket on optic yellow ball with this third victory at one of the oldest and most traditional stops in the English sporting calendar, Queen’s Club.

Now all eyes, and British hopes, have turned to Wimbledon where Murray, and the other repeat grass champion—Roger Federer won his sixth title in Halle—will hope to pick up where they left off last year. Not only were they the big grass winners at the weekend but they contested both the Wimbledon and the Olympics finals at the All England Club in 2012.

For those still in search of tour competition, there are the English charms of the south coast in Eastbourne, where top seeds No15 Milos Raonic, No17 Gilles Simon, No18 Philipp Kohlschreiber and No20 Juan Monaco are joined by four other likely seeds for Wimbledon.

At s-Hertogenbosch in the Netherlands, No4 David Ferrer and No 10 Stan Wawrinka took their first steps on grass since reaching the final and quarter-finals respectively in Paris. Ferrer lost in his opening match, but Wawrinka advanced.

Squeezed into this high-profile calendar, though, is a handful of small gems that provides an alternative transition from the French Open’s clay to Wimbledon’s grass.

These are the warm-up, points-free, garden-party settings of venues that sit comfortably alongside The Season’s other June highlights of Royal Ascot and Henley Regatta.

But the one that has drawn the most prestigious participants is buried within the near-perfect setting of Stoke Park.

The Boodles is hosted within Stoke’s stunning 350-acre estate in the depths of the Buckinghamshire countryside, and it’s a setting that has always attracted the cream of the men’s tour.

No fewer than five of the best dozen men in the world are here, including the only appearance beyond the courts of Wimbledon itself by the top man, the world No1, Novak Djokovic.

It was on these lawns in 2011 that Djokovic fine-tuned his grass game on his way to winning the Wimbledon title and the No1 ranking for the first time. And he returned last year on his way to both semi-finals in SW19—The Championships and the Olympics.

Also returning is Croat Marin Cilic, who had another great run at Queen’s last week, losing his 2012 title to Murray in the final. He also won the trophy at The Boodles last year, and brought his considerable grass skills to Stoke Park’s lawns as heat and humidity descended at last on this corner of Europe.

To the soundtrack of bird-song, champagne corks and the drift of distant laughter, Cilic took on and beat the rising talent of Slovenian Aljaz Bedenen, 7-5, 6-2.

Making his third appearance at The Boodles is the ever-popular Juan Martin Del Potro. After missing most of 2010 with a serious wrist injury, the Argentine surged back into the top 10 last year, and this year he has won in Rotterdam and reached the final of Indian Wells before missing most of the clay season with illness. Back into competition at Queen’s last week for the first time in a month, he reached the quarters.

Del Potro has been on Wimbledon’s practice courts this week—joined Tuesday by Rafael Nadal for his first grass hit of the year, and tomorrow by Federer fresh from his Halle win—but the big Argentine will also be sharpening his competitive edge at Stoke Park.

Another in a similar position is Serb Janko Tipsarevic. Turning to grass after his third-round loss in Paris, he admitted that The Boodles was only his second day on grass since Wimbledon last year as he, too, coped with illness.

Not that his lack of practice showed. He became involved in a long and remarkably competitive opening match on the fresh, slippery turf against a man who draws fans and headlines whenever he shows his face.

Grigor Dimitrov, a favourite with tennis purists since winning the junior titles at Wimbledon and the US Open in 2008 with his all-round, one-handed game, may since have shaken off references to Federer—his idol growing up—but has retained enough flair and charisma, along with a girlfriend going by the name of Maria Sharapova, to guarantee a crowd.

Dimitrov, more handsome than such a talented 22-year-old deserves to be, has taken time to mature into his multi-stranded style of tennis, but he reached his first final at the start of the year, broke into the top 30 this spring and then drew plaudits when he took Nadal to three sets on the Spaniard’s favourite clay in Monte Carlo and went on to beat Djokovic in Madrid.

Against Tipsarevic, he skidded, joked, applauded his opponent and generally charmed the packed stadium. But in the final tie-break, he came off the worse by a hair’s breadth, both in the match and in winning over the fans, for it was Tipsarevic who took advantage court-side of the proffered champagne and kisses from fans on his way off.

Such moments sum up the double pleasure that these exhibition-come-competition events bring to fans and players. Take the hiatus mid-match in the last contest of the day at The Boodles. The big personalities of Santiago Giraldo, 94 in the rankings, and enthusiastic Tweeter, Sergiy Stakhovsky, ranked 117, may not be the biggest names in tennis but when front-row enthusiasts offered both champagne and hugs, Giraldo could not resist either—the reason, perhaps, that he went on to lose in the final tie-break!

For the mood is light but the tennis taxing enough to stretch the sinews and heart-rate—and the grass is pristine enough to test both footwork and timing. Little wonder that so many of the players leaven their Wimbledon training schedule with this fun-packed but match-sharpening competition.

Lined up for the rest of the week at Stoke Park, which runs until Saturday, are:

Novak Djokovic, No1
Tomas Berdych, No6,
Juan Martin del Potro, No8
Richard Gasquet, No9
Marin Cilic, No12
Sam Querrey, No19
John Isner, No21
Jerzy Janowicz, No22
Alexandr Dolgopolov, No24
Grigor Dimitrov, No31

Click here to view more pictures from The Boodles