Wimbledon 2013: Dustin Brown could be set to reach the quarter-finals at SW19 after downing Lleyton Hewitt in four sets 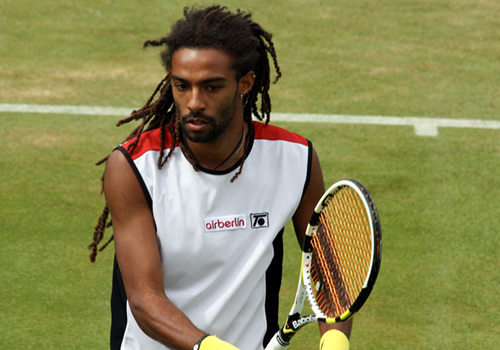 It was opening Wednesday at the All England Club, a day that was soon dubbed “black Wednesday” as seeds tumbled—literally on the greasy grass and metaphorically as top seeds went out to lower-ranked opponents.

One player to make his exit that day, with rather less fanfare than Roger Federer, Victoria Azarenka and Maria Sharpapova, was former champion, Lleyton Hewitt, even though the former champion came to Wimbledon riding a revival of grass form.

At Queen’s, Hewitt reached the semi-final with notable victories over Grigor Dimitrov, Sam Querrey and Juan Martin del Potro. Then he put out one of the best players of the last few months, Stan Wawrinka, ranked 10 in the world, in straight sets.

The draw looked set for Hewitt to advance to a third-round meeting with John Isner, but a couple of things got in the way. First, Isner retired injured in the third game of his meeting with the 111-ranked Adrian Mannarino, and then Hewitt bumped into the charismatic serve-and-volley tennis of Dustin Brown.

Gradually the buzz around Wimbledon’s media room grew as the German-Jamaican took apart Hewitt’s game in a wonderful display of attacking, first-strike, grass-court tennis—against one of the last decade’s most prolific winners on grass. Who was this handsome, rangy and exciting player and why had he not reached the third-round of a Grand Slam before this?

In fact, for those with a history of hanging around London’s early grass tournaments, Brown was a memorable name from the past—well from three years ago, at any rate.

It was Queen’s Club, 2010, and this tennis enthusiast was prowling the practice courts, checking the warm-ups of the usual Queen’s culprits: Feliciano Lopez and Sam Querrey, Marin Cilic and Andy Roddick, Richard Gasquet and Nicolas Mahut…and spotted a different face.

It prompted the following:

14 June 2010: It’s mid-week, the practice courts are damp and dull from the latest cloud-burst, and there’s barely a cursory glance from the thin drift of chilled spectators killing an hour or two before play gets under way once more.

Suddenly there’s a ray of sunshine in the form of an unknown player knocking up in the early afternoon gloom.

He drew the eye with his tall angularity, long limbs and shock of coiled hair. But the attention was first grabbed by the feet. They were clad in huge white trainers laced elaborately with dayglo bows.

His identity was only revealed later when he took to court against Denis Istomin. It was Dustin Brown, half Jamaican, half German, multilingual and, despite being 25, on an upward trajectory.

He may only be ranked 106, but a year ago he was down at 370 and the year before at 455. He appears to be one in the current succession of late-flowerers, only just bursting out of the Challenger circuit.

Will he continue to rise? If personality and style have anything to do with it, no question!

He lost in the second round, but went on to qualify for Wimbledon’s main draw—he lost in four sets to No16 Jurgen Melzer—and reached the quarters on Newport’s grass, beating Querrey to do so.

At the US Open, he achieved what would be his best Major run to Round 2, where he lost to Andy Murray.

There were even hints that Brown may join Murray in playing for Great Britain when a lack of support from the Jamaican Tennis Association forced him to look elsewhere: His paternal grandparents were British. Instead, in October 2010, he opted to compete for Germany, his mother’s home and his country of birth.

By the end of 2010, Brown was inside the top 100 for the first time, but gradually during 2011, the trail went cold. There were still occasional headlines—he caused a major upset as a qualifier at the BMW Open by beating Wawrinka in the first round.

But he lost in the opening rounds of the Australian and French Opens and subsequently recorded just one more Grand Slam main-draw match—a loss—at last year’s Wimbledon. By February, he was outside the top 100 again and by the end of the year down to 160.

Instead, he had some success in doubles, and in 2012 reached three finals and won Casablanca. But he claims grass as his favourite surface—and with his penchant for serve and volley tennis, it’s easy to see why.

That love affair with the turf has now taken him through Wimbledon qualifying to play his first main tour match since the first week of 2013—he won three qualifier rounds in Doha, only to lose to David Ferrer in three sets in Round 1.

More than that, he has beaten Hewitt, won a new band of followers and fans, and has a great chance of reaching the fourth round, too. For in Mannarino, Brown faces a man whose career has followed a similar trajectory, and who is also into the third round of a Grand Slam for the first time.

The year after Brown broke 100, the nimble flair of Mannarino took him still higher to briefly break the top 50. His rise was marked by a quarter-final run at Queen’s—also followed by this tennis correspondent—and the second round of Wimbledon.

But until this week, Mannarino has not won a main-tour match all year, though he met Brown at a Challenger event in Sarajevo, winning in two tie-breaks. They have not met on grass, and one senses that on this surface, and with the confidence of beating a former Wimbledon champion behind him, it will be Brown drawing a lot more attention before this unusual Wimbledon draw is done.

Only one seed, No25 Benoit Paire, stands between him or Mannarino and a quarter-final place. It may have taken longer than expected, but all the more exciting for that.