Wimbledon 2013: Laura Robson reaches the third round for the first time after comfortable 6-4 6-1 win over Mariana Duque-Marino 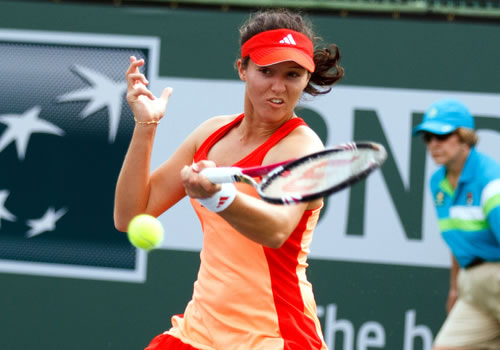 Laura Robson reached the third round for the first time Photo: Mirsasha/Flickr

Laura Robson may still be a teenager, and she may have been waiting for 24 hours to play her second-round match—such delays are hard for any player, but especially so for one carrying the hopes of a nation in her home Grand Slam.

But in the end, the delay may have worked to Robson’s advantage, for her match—on another day beset by rain—was relocated to Centre Court, the biggest stage of all. And if there is one thing that Robson thrives on, it is the big stage.

In the first match to get under way at Wimbledon on first Friday, beneath a roof closed against the elements, the focus across the grounds, and no doubt across the entire country, was on this cool young woman. And if she was in any doubt about the affection and hope she carried, the roar of her welcoming committee, echoed and reverberated by the roof, would have left her in do doubt.

It’s five years since Robson, then just 14, won the junior title here, and this is now her fifth time in the main Wimbledon, her 11th Grand Slam appearance, but along the way, she has taken great players and former champions in her stride.

Last year, she reached the fourth round of the US Open by beating Kim Clijsters and Na Li. Since breaking into the top 50 this season, she has also beaten former Wimbledon champion Petra Kvitova at the Australian Open, 11-9 in the third set, taken down world No4 Agnieszka Radwanska—for the loss of just four games—in Madrid, and beaten Venus Williams in Rome.

She reached the second round here for the second time with another big scalp, that of No10 seed Maria Kirilenko, in straight sets—but now she was aiming for a new feather in her cap: her first Wimbledon third round.

She played Colombia’s Mariana Duque-Marino, whose career-high ranking of 94 came three years ago, though she had come through three rounds of qualifying and beaten No36 Julia Goerges in the main draw. And despite Robson’s giant-killing powers, she has succumbed to lower-ranked players before—and had suffered eight first-round defeats in 2013.

But Robson came out hitting big against, unleashing her formidable left-handed forehand immediately to hold serve. But Duque-Marino was not intimidated, holding her own serve to love and then taking advantage of a couple of second serves to earn three break points against Robson. A bold chip-and-charge play brought the break for a 2-0 lead for the Colombian.

Robson now seemed to find a real rhythm on her forehand, hitting two into alternate corners to work a break point and she converted it before consolidating a love hold with some big serve-and-forehand one-two plays. And she was not done. She pummelled both wings with some glorious flat and penetrating shots of real venom to break again and hold for a 5-2 lead.

The crowd could already barely contain themselves—cheering before points were even over—but the down side of such enthusiasm are the sighs that follow errors.

Serving for the set, nerves briefly took hold of the Robson arm, as they are prone to do on her serve. She began with a caught ball toss, and twice double faulted to huge groans of disappointment. Duque-Marino deployed a drop-shot and Robson put a lob long. A netted backhand gave the break back.

Robson regrouped to renew the attack on her opponent’s serve and found great depth to draw errors and two break points. She converted confidently for the first set, 6-4.

Robson carried her momentum—increased, no doubt, by the increasingly vocal support—into the second set, holding to 15 and then breaking with a glorious angled cross-court winner that just kept swinging away from the Colombian’s racket.

Now she stepped inside the baseline to take the ball on the rise with even more aggression, powering another cross-court forehand away to hold for 3-0. Even the sound of ball on racket was impressive, a gun-shot compared with a pop from the Duque-Marino racket.

The Colombian fought off deuce with her only two aces of the match on the dot of an hour, but it would be her only game of the set. Robson did not waver this time, breaking to love in the sixth game and serving out to love with a wonderful sequence of forehands to take the match, 6-1.

In her first Wimbledon third-round, Robson will play another lower-ranked player, New Zealander Marina Erakovic, who took out the other seed in this segment, Shuai Peng, but she was suitably cautious.

“I knew going into the match today that I was the favourite, and I thought I handled that pretty well. And Marina Erakovic, who I play tomorrow, I’ve lost to her on grass before. She’s got a big game, a huge serve, a good slice as well. Pretty much a perfect game for grass.

“Yeah, I know it’s going to be a tough one. She’s been doing really well in doubles lately, as well. Her net game is on the ball.”

However, the draw is opening up nicely for Robson to advance still further: If she beats Erakovic, she will set up a fourth-round meeting with Kaia Kanepi, who put out No7 seed Angelique Kerber, and the Estonian has the kind of big-hitting game that Robson will happily feed off. Beyond that lies the toughest of prospects: either Sam Stosur or Serena Williams, followed by Li or Radwanska—though of course Robson boasts wins over the latter pair in the last year.

Before that, Robson doubles to play—her women’s doubles with Lisa Raymond scheduled for later today. But she is entirely unfazed.

“I’m very happy to play both. I’m in mixed, as well. It’s grass, so you’re never going to have an unbelievably long match. And if you do, the points tend to be quite short anyway, so it’s not overly taxing. Yeah, if I didn’t think I could handle it, I wouldn’t have entered.”

So calm is Robson, so composed, and so enjoying herself at this tournament—“the biggest dream is to win here pretty much…that’s how it always has been”—she looks ready to handle anything.