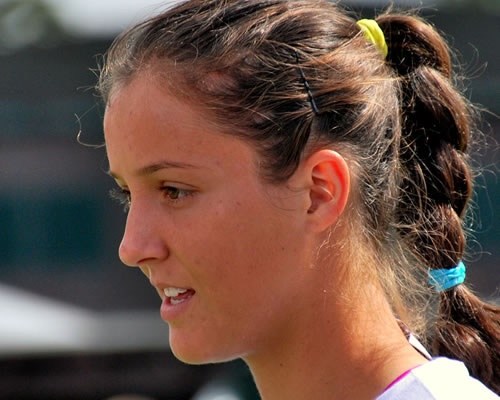 It would be a daunting prospect for most teenagers, but 19-year-old Laura Robson seems to revel in the big occasion, the big crowd and, more than anything, the big stage of her home Grand Slam, Wimbledon.

It’s hard to believe it is five years since this young woman, then just 14, won the junior title here, and just has hard to consider that this is now her fifth time in the main draw here, her 11th Grand Slam appearance.

But the top-ranked British woman has often been handed the big stage at the Majors as much through the status of her opponents as her own considerable talent and charm. Several times she has faced former Grand Slam champions, several times her big-hitting, left-handed game has turned her into a giant-killer.

As her new coach Miles Maclagan, with her for the first time for this brief British grass season, said:
“She clearly has the mind for the big stadiums, for the big time. Just to see those things—a young player with a lot of firepower and the ability to take on the top players—is exciting.”

So one thing was certain as she walked onto the beautiful circle of Court 1 in front of her affectionate and cheering fans. She would not be intimidated by the new world No10, Maria Kirilenko, even though her own form had see-sawed this season.

Kirilenko, though, was a dangerous opponent enjoying her own rise in form and rankings. She, like Robson, enjoyed some success here in the 2012 Olympics, reaching the singles semis. She won her first title since 2008 in Pattaya City this year and her first semi in a Premier Mandatory in Indian Wells. She then proved her versatility by reaching the quarters in Roland Garros.

The two women had never met before, but many will already hope they soon meet again, for they are both first-strike, aggressive players. So while the rallies were short, they were full of fine shot-making.

Right from the first, though, Robson hit her form. She lost the first point but from then on, she dropped barely another on serve. From the second point—cheered to the rafters—this was sizzling ball-striking from both women, each going for their shots, eager to take the initiative. Only once did either look in danger, and that was Kirilenko in the third game, a deuce that she defended with ease.

But what was already standing out from the Robson game was her serve: two aces in the third game, two in seventh, and even those that were not aces were winning points quickly. That kept her nose in front, but it was her searing ground stokes that made the decisive break in the eighth game, hitting first-strike winners off the Kirilenko serve on forehand, then the backhand, and taking the game with a cross-court backhand to lead 5-3.

Robson closed out the set in the same style, opening a 40-0 lead with more forehand winners—one of them applauded by Kirilenko. The crowd rose to the Briton’s cause as the Russian edged to 40-30, and Robson delivered with another big serve. She led by a set, 6-3.

It had been a top quality nine games that produced only five errors from Robson and none at all from Kirilenko. The difference though was in the winners: five from the Russian but 13 from Robson.

The second set began in the same vein, Robson opening up the wings with her forehand to earn break point in the third game and she took it with a backhand. She looked fearless, taking drive volleys out of the air and acing to hold for a 3-1 lead.

Still Robson swung freely, making winners directly off the Kirilenko serve to go 40-0 and the crowd, thrilled at what they saw, cheered her through deuce to take another break.

But now the nerves took hold, or so it seemed. With a 5-1 lead in sight, she double faulted, began to catch her serve toss, overhit a forehand and offered up her first break chance of the match. It took a second for Kirilenko to break, and she then held serve to close the deficit to 4-3.

Again Robson looked less than certain on her serve, following a double fault with an ace, a forehand error with a winner, but it was enough to hold for 5-3, and she served out yet her giant-killing victory, 6-4.

Robson plays the kind of full-blooded tennis that thrills when it goes well, keeps the nerves jangling when it misses. Even with her brief loss of concentration in the second set, she made 18 winners to 12 errors, three times those of Kirilenko on both fronts. No wonder the crowd rose as one to cheer her from the court—and she was pleased with the performance, too:

“I think it was a big one for me because although I really like grass and I seem to play well on it, I’ve never actually done overly well here. I’ve only made the second round once. So it was a big win for me. I think it was good that I managed to tough it out after I got so nervous in the second set. And I’m happy.”

Also in this quarter, the top seed Serena Williams continued her ground-breaking run with victory over Mandy Minella, 6-1, 6-3, to take her streak to 32—the longest since Justine Henin got to the same number across the 2007 and 2008 seasons.