Wimbledon 2013: Maria Sharapova refuses to make excuses after a shock loss toworld No131 Michelle Larcher de Brito in round two 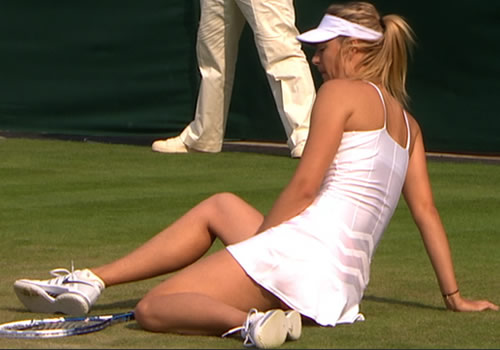 Maria Sharapova was in no mood to make excuses after suffering a shock defeat by world No131 Michelle Larcher de Brito in the second round at Wimbledon.

The third seed lost 6-3 6-4 on Court No2 after having fallen three times in the second set and requiring lengthy treatment on her hip.

But the 26-year-old, playing in her 11th consecutive Wimbledon, reserved praise for her Portuguese opponent after losing in the second-round for the first time since 2009.

“I think it was a combination of everything,” said Sharapova. “I give her a lot of credit. I think she played extremely well today. She was really solid from the baseline.

“I don’t feel like I was aggressive enough, that I hit the ball deep enough. I wasn’t ready after the returns or the serves. She’s someone that plays extremely aggressive. I just wasn’t there.”

There have been concerns over the safety of the courts at SW19 after a record seven singles players withdrew or retired from their matches on Wednesday.

The likes of Victoria Azarenka, Jo-Wilfried Tsonga and Marin Cilic were all forced out through injury on day three.

And Sharapova continued: “I don’t think I’ve ever fallen three times in a match before in my career, so that was a little strange.

“But that’s certainly not an excuse. I think today I’ve seen a lot of players fall and take a few hits and a few injuries. I think that’s just part of the game, part of what we have to deal with.

“I’m not making an excuse about the court. That’s not why I made errors or I didn’t make returns.

“As I said, the situation on the court was exactly the same as it was for my opponent. I just didn’t deal with it as well as she did.”

Meanwhile, the 20-year-old De Brito could not hide her delight at reaching the third round at SW19.

“I’m really excited,” she said. “I really can’t believe it. It’s a little bit of shock and excitement.

“I’m just really happy I got through that match. It was a really great win for me. I’m feeling really excited.”