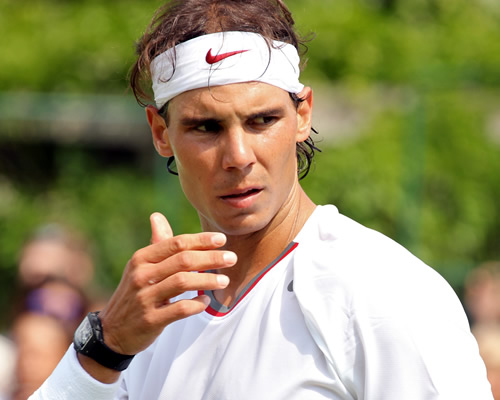 Not since this time last year have all the ‘big four’ competed in one Grand Slam, but Wimbledon 2013 will reunite Novak Djokovic and Roger Federer with Rafael Nadal—who missed the 2012 US Open and this year’s Australian Open—and Andy Murray—who withdrew from Roland Garros.

Indeed the packed men’s draw boasts a full complement of seeds, including Juan Martin del Potro, the only other man to win a Slam in the last eight years, who returned to grass after missing the French Open with illness.

Yet there is something fundamementally different this time around. Aside from Nadal’s recent injury absence from New York and Melbourne, the “big four” have headed their own quarters in the Slams since the start of 2009—apart from when del Potro and Soderling usurped Murray’s No4 spot at the Australian Opens of 2010 and 2011.

Now though, Nadal has slipped behind David Ferrer to the No5 ranking despite winning the French Open, making him a potential hurdle of the highest order in the quarter-finals to Djokovic, Murray, Federer—or of course Ferrer.

The big question, then, as the metal tokens were shaken in their bag at the most low-key and traditional of draw ceremonies, was who the unfortunate would be. It was Federer.

The next question for everyone gripped by the grass rivalry of 2012 between Federer and Murray on Wimbledon’s Centre Court—the former winning The Championships, the latter winning Olympic gold—was whether they could again face one another in the title match. The answer was no: They were drawn in the same half.

So for both Federer and Nadal, the two most decorated Major winners in the draw, the road to another title is formidable: one another in the quarters; Murray in the semis; and Djokovic in the final.

But it’s ill wind that blows nobody any good. Ferrer, by avoiding all four of the men he struggles so hard to beat, is in a position to build on the best phase of his long career.

Grass, though, can throw up unexpected heroes, and the all-too-brief season of four tournaments has thrust some lower seeds into the limelight. For while Federer and Murray won in Halle and London, there have also been characteristically strong grass performances from others.

Mikhail Youzhny and Richard Gasquet showed off their all-round flair in reaching the Halle semis, with the Russian going on to take the first set from Federer in the final with some of his best tennis of the year.

And this week, the strong run of Stan Wawrinka, newly back in the top-10, continues on the Dutch grass, while unseeded Feliciano Lopez, who counts Wimbledon among his best Slams, has reached the final in Eastbourne.

Just below the elite seeds are persistent challengers who have already proven that Wimbledon is very much to their liking. A semi-finalist in London last week, Jo-Wilfried Tsonga has reached the semis at Wimbledon for the last two years , taking out Roger Federer in 2011. Tomas Berdych did the same in 2010 to reach the finals.

Then perhaps, with this slightly out-of-kilter draw, it is the year when one of the young guns will step up to the plate. Dimitrov, Kei Nishikori and Milos Raonic are all in Ferrer’s quarter and spread evenly through the segments.

But at the top of the draw, the top of the rankings, is the 2011 champion Djokovic, who came close to beating Nadal in his own clay kingdom of Paris—and the Serb knows he has, at most, only to face one from Murray, Federer or Nadal.

Can anyone halt his progress before his final destination? And which of the other three is most likely to keep that appointment on final Sunday on Centre Court?

Djokovic, like Nadal, has not played any tournaments since Paris, but has been working long and hard both on Wimbledon’s practice courts and in a testing match at an exhibition event at Stoke Park.

There, he took on Dimitrov, and looked sharp, fast and sure-footed—indeed in great shape in all areas of the court.

He also sounded full of confidence: “I don’t think grass is probably my most preferred surface, but over the years I’ve played really well at Wimbledon, reaching the semis several times and winning a couple of years ago. I like playing on it and it makes me be aggressive on the court. Hopefully I can raise the level of my game as the tournament goes on.”

Djokovic will not admit it out loud, but he must be delighted to avoid the other big three not just in his quarter but in his half.

Nevertheless, he has one of the more unpredictable opening opponents in Florian Mayer. The German only just missed out on a seeding, ranked 33, and reached the quarters at Wimbledon last year, where Djokovic beat him for the loss of just nine games.

Beyond that, it is hard to see anyone troubling him until a fourth round against Tommy Haas. The 35-year-old German has been one of the stories of the year—indeed since beating Federer on grass at Halle in 2012—and will look to go deep with a No13 seeding that keeps him clear of big names. He also scored a win over Djokovic in Miami in straight sets this March, and beat him at Halle and Wimbledon in 2009. However, Haas may face, in the third round, the winner of a big first-round stand-out between the finalists in Eastbourne, Lopez and Gilles Simon.

The quarters hold No7 seed Berdych, Djokovic’s biggest challenge before the finals. The Czech has performed well at Wimbledon before, and he beat Djokovic—albeit on clay—in Rome this year.

Berdych, though, has other threats in an interesting eighth. First up is Martin Klizan, one of the young rising talents, aged 23 and ranked 35, then big men such as Kevin Anderson and Querrey—who has a noteworthy opening rematch of his 2012 Australian Open meet with Bernard Tomic. Berdych ultimately faces Gasquet, who beat him in Miami.

Although fourth seed Ferrer has a wide-open draw, in truth the grass has not been his best medium. He lost in his first match at s’Hertogenbosch this week and Wimbledon remains the only Slam at which he has yet to reach the semis.

Yet the hard-working Spaniard with the ever-growing repertoire of shots will hope to change that this year. And against the seeds in his eighth, he has a dominant record: Alexandr Dolgopolov, Raonic—yet to translate his big game onto grass—and even the superior grass-court talents of Philipp Kohlschreiber, a quarter-finalist at Wimbledon last year and near a career-high ranking.

It is the bottom eighth where trouble may lie: Nishikori has played several warm-up matches at Hurlingham this week; del Potro may not have got beyond the fourth round at Wimbledon but he played superbly to take the bronze medal at London 2012; and Dimitrov beat Anderson at Wimbledon last year and was half of a second-round cracker in 2011 with Tsonga. The young Bulgarian also played some wonderful grass-court tennis to push Djokovic hard at Stoke Park this week, one of several matches he has squeezed in since falling to Hewitt at Queen’s. This could be the year he proves his worth.

It is, in theory, the Federer quarter but such is Nadal’s status—including his 20-10 head-to-head dominance over the Swiss—that it is hard to draw a line between them.

Should they reach the designated quarter-final, it will be their first grass meeting since that final, one of the greatest ever played, in 2008. Nadal won, and he has won all three of their subsequent Grand Slam matches.

Federer’s route to that quarter looks a little more straightforward than his rival’s: fellow 31-year-old Victor Hanescu is his opener followed by a rematch of last year’s second round against Fabio Fognini—though the Italian is now close to a career high ranking. Lurking here is also the man who beat Nadal in the second round last year, Lukas Rosol, himself at a career high only just outside the seedings at No34.

Federer’s fourth round holds Nicolas Almagro or a possible rematch with young gun Jerzy Janowicz after their tussle in Rome last month.

The big Pole, at a career high 22, is the first opponent of British wild card Kyle Edmund, a tough draw for the 18-year-old who has put some quality matches together on grass this month.

Nadal’s first seed could be Benoit Paire, who lost both their matches this year. Next may be John Isner, who famously took Nadal to five sets two years ago in Roland Garros, but he was a surprise first-round loser this week to the man he meets in the first round again at Wimbledon, Evgeny Donksoy.

The strongest player in Nadal’s section is Wawrinka, now in the final in the Netherlands and enjoying one of his best ever seasons under the tutelage of Magnus Norman. But he will have a very short turn-around for London, plus a first match against one of the best active grass records, Hewitt, in a highlight of the 2013 first round.

Nadal opted out of Halle to rest his knee, so it is not surprising he looked rather rusty in his only competitive grass match at Hurlingham. He will, though, be fresh and improving with each round.

Considering Murray has been carrying a chronic back problem for much of the season, he has put together some strong results to stand clear at No2 in the rankings. He will also be buoyed up by winning the Queen’s title last week in his first tournament since Rome.

Both Tsonga and Cilic have far-from-straightforward openers, however, with the Croat drawing Marcos Baghdatis and the Frenchman David Goffin. Also in Tsonga’s section is the dangerous Ernests Gulbis and veteran Xavier Malisse—no slouch on grass.

Between Becker and Tsonga/Cilic, Murray finds some grass-court quality in Nicolas Mahut, who just reached his first grass final in s’Hertogenbosch, and Youzhny a possible Round 4 alternative to Janko Tipsarevic—though the Serb looked confident and aggressive in his matches at Stoke Park this week.

The third Briton in the draw, No216 ranked James Ward, could face Murray in the second round but first meets No74, Yen-Hsun Lu.