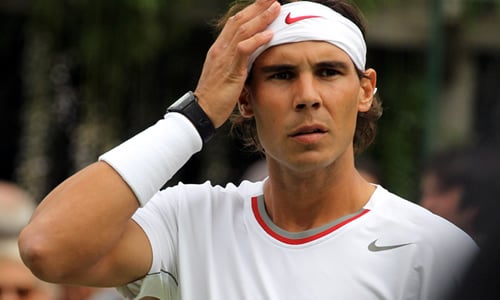 The headlines around Rafael Nadal at this year’s Wimbledon had all been around his No5 seeding.

Even considering this run after a seven-month absence, his fellow players did not think so. For it was that absence, compounded by points accumulated in an outstanding season by David Ferrer, that determined Nadal’s drop to No5—and that was that.

It would not, the likes of his potential quarter-final opponent Roger Federer emphasised, not make a lot of difference in the end…

What no-one anticipated—unless his name was Steve Darcis—was that Nadal would not even make it as far as his appointed quarter-final place.

What no-one expected—except that 29-year-old, No135 ranked Belgian Darcis—was that Nadal would out-do even last year, when he made his earliest Grand Slam exit since Wimbledon 2005 in the second round to Lukas Rosol.

It was after that very match that Nadal disappeared from the tour to heal his injured knees. And his return to London’s lawns—his first competitive match on grass since—saw him suffer his first-ever first-round defeat in 35 Majors.

Right from the outset, Darcis, playing a the near-perfect style of tennis for grass, all attacking, volleying, slicing and varied shot-making, had Nadal against the wall. He forced eight break points in the fifth game, another chance to break in the seventh and finally made the break-through in the 11th.

But then Nadal did what he so often does, broke straight back and most of those packed into No1 court, exactly an hour after this fascinating match began, expected the Spaniard to take the tie-break. In fact, he never even led the tie-break, as Darcis flirted with the lines in both corners, skimming the sideline time and again with slice, to take the set, 7-3.

It had taken as long for Nadal to find himself a set down as it had taken Federer to win his match an hour before. And the second set unfolded just as as tensely, with the crowd getting behind each man in turn.

This time it was Nadal who broke first, in the same 11th game, and this time it was Darcis who broke straight back for another tie-break. This one was much closer, both playing some superb points with variety, pace, depth and touch.

The Wimbledon crowd likes few things more than an underdog, and one that works his socks off while wielding a stunner of a single-handed backhand, pleases them most of all.

Nadal was not short of vocal support, but Darcis was gathering a real groundswell from the fans. When he broke in the first game of the third set, suddenly this began to take on the look of a genuine upset, and now the reason seemed written all over Nadal’s body-language.

His movement was not as nimble, not as dynamic as usual, and the more often Darcis brought him forward, the more errors Nadal seemed to make.

The Spaniard could not even get any leverage on his serve. So although the error count rose for Darcis, Nadal could not capitalise and the Belgian kept pressing forward, fending off a break point in the eighth game with a courageous serve-and-volley winner.

And that would be Nadal’s only chance. Darcis held serve, and then served out the set and match, 6-4, after almost three hours of gripping tennis.

Nadal had increasingly looked sub-par but Darcis must take credit for a grass showcase of a match: 53 winners to 24 errors, with 32 points won out of 46 net approaches. It made him the lowest-ranked player ever to defeat Nadal at a Grand Slam.

Afterwards, Nadal was asked repeatedly about the state of his fitness, his knees, his condition, and to his credit he would not be drawn into saying anything: “Is not the right day. I tried my best out there in every moment. Was not possible for me this afternoon, and that’s all.”

It became clear, too, that the Darcis strategy of keeping the ball low over the net, and pulling Nadal forward, was spot on: “Grass is probably the toughest surface for me today, because I had to move and I have to play in a lower position than on the rest of the surfaces.”

And Nadal went on to acknowledge the quality of his opponent’s tennis: “Only thing I can do today is congratulate Steve Darcis. He played a fantastic match. Everything that I will say today about my knee is an excuse, and I don’t like to put any excuse when I’m losing a match like I did today. He deserve not one excuse.”

With his typical shrug of shoulders and lifting of the eyebrow, he concluded: “Happy I’m not, but life continues…”

As for Darcis, who won the second of only two career titles in 2008, when he reached a career-high ranking of 44, he came to Wimbledon having lost in the qualifying round at ‘s-Hertogenbosch, and in the first round in 12 of his 18 previous Majors.

So yes, he admitted, he was a little surprised: “A little bit. Just the second guy in the top 10 that I beat. So, of course, it’s one of the greatest wins that I have. It was a great match from the start to the end. So I’m really, really happy today.”

But he recognised the effectiveness of his tactics: “I think today I serve very good. I could use a lot of slice. And I think he didn’t like it so much. Of course, he didn’t play his best tennis. But I knew it is the first match on grass for him. Me, I played already four.

“I heard also is the first time he lost in the first round of a Grand Slam, so it’s even tougher I think for him. Maybe he was not in the best shape ever, maybe he didn’t play his best match. But I have to be proud of me, I think.”

He does, indeed, and now has the chance to win again in his next match against the 119-ranked Lukasz Kubot.

Other seeds to fall in this half of the draw included Janko Tipsarevic to Viktor Troicki and Fabio Fognini to Jurgen Melzer. The rest, including Andy Murray and Roger Federer—the most likely beneficiary of Nadal’s loss—advanced to Round 2.