Wimbledon 2013: Roger Federer breezes past Victor Hanescu in straight sets on Centre Court to reach the second round 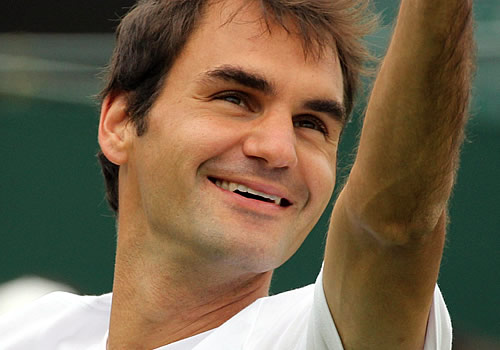 It was certainly a day that earned all the superlatives that have been flying around Wimbledon since the men’s draw was made.

With Roger Federer scheduled to open proceedings on Monday, as defending champions always do at this most traditional of tournaments, it was certain that world No2 Andy Murray and No5 Rafael Nadal would also be in action, for they were drawn in the same half.

But protocol determined that Federer should not only open the top men’s action but he should, as he has done six times before, be the very first person in the Championships to play on Centre Court. Even so, few other players command a standing ovation simply for walking onto the court, especially before they have hit a single ball in a single match.

But that was the welcome accorded reigning champion Federer at 1pm precisely. Wimbledon is never a place to tolerate late arrivals, and never feels the need for musical fanfares. Applause and cheers will do quite nicely, and he drew more of both as he took to the baseline to open serve—and then again when he won the first point of the match off a second serve.

Protocol also determines a certain sartorial style, and Federer’s solutions to the all-white rules have often created headlines of their own: Not this time. He may be shorter of hair, even a little shorter of shorts, but he of all players loves and preserves the white niceties. He is not, though, above a small ‘statement’—and in 2013, it is in fluorescent orange Nike ticks and soles of his shoes.

He made a statement in the opening game, too, against fellow 31-year-old world No47 Victor Hanescu. Federer closed out a love hold with a ridiculous reactive volley switched in the blink of an eye from a backhand to a forehand.

Hanescu just gave it a resigned look—and there would be many more. Federer broke serve, and then aced a love game for a 3-0 lead in six minutes.

His next love hold boasted a running forehand winner taken wide of the tramlines and into Hanescu, as though the Swiss was not intimating enough.

Federer finally dropped a point in the seventh game, his only one in 23 on serve in the first set, but hurried on to close it out, 6-3, in 24 minutes.

In barely half an hour, he had broken twice in the second as the crowd oooh-ed and aaah-ed at almost every point. Hanescu was not playing at all badly—he made only two unforced errors in the first set, five in the second—but unless Federer’s level dropped, this was already a lost cause.

With only two errors to 14 winners from the Swiss racket in the 6-2 second set, the champion then raced to a 3-0 lead in the third as the scoreboard ticked over to one hour.

If anything, Federer had upped the pace, attacking at every opportunity. Now the crowd roared on every point from Hanescu, particularly a winning lob over the volleying Federer’s head.

Yet even there, the Swiss would not be outdone, hoisting his own lob against the increasing net rushes of Hanescu to bring another break and a 5-0 lead.

Federer even had the temerity to challenge a serve that was called out when he stepped up to serve for the match. He was wrong, but won the point anyway—and the next three for a whitewash conclusion: 6-0 in 18 minutes.

The match had taken 69 minutes, and extended his record number of grass-court match wins to 122 for just 17 losses. He was, naturally, asked about how he felt about being on and off court so quickly.

“Look, I thought overall I played a good match, no hiccups on the serve. Returned good, sometimes aggressive, sometimes with the chip the way I usually do it on the grass anyway. Then I was moving pretty well even though I thought it was quite slippery, because it is opening Monday. It always feels a bit slippery. I think I handled that well. Just a bit of a breeze, as well: It was cold. I’m happy to get out of there early and quickly. So it was a perfect day.”

But what was most impressive was not the speed but the style in which he despatched an opponent who made only 13 errors in three sets. For Federer hit 32 winners to just six errors, winning 21 out of 25 points at the net.

And if that isn’t a statement of intent for the tournament, it’s hard to know what is.