Wimbledon 2013: Roger Federer suffers a shock second-round exit at the hands of world No116 Sergiy Stakhovsky 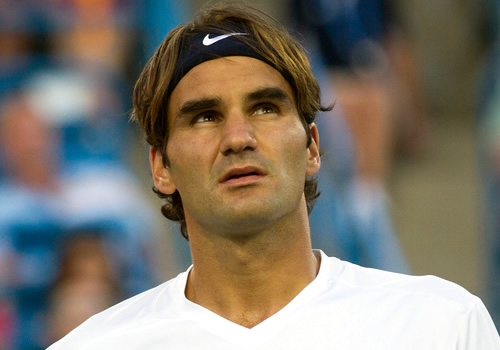 The day started with shock news about Roger Federer. Of all the players in either the men’s or women’s draw to fall foul of Wimbledon’s traditions, the seven-time champion seemed the most unlikely candidate.

But sure enough, he had been reprimanded for his footwear, despite sporting pristine white from head to toe. The soles of his shoes were, it appeared, just too orange.

But that headline began to look very insignificant as a day of drama unfolded at the All England Club.

With Rafael Nadal already gone in the first round, the names tumbled throughout the day, many of them before they had even taken to court.

First it was No2 seed Victoria Azarenka, then No10 Marin Cilic, No18 John Isner and Nadal’s victor, Steve Darcis—all gone with injury. No8 seed Petra Kvitova went through courtesy of another walkover, but a multitude of other women seeds fell to better opponents: No9 Caroline Wozniacki—though she fell and twisted her ankle mid-match—and No12 Ana Ivanovic, No16 Jelena Jankovic and finally, in straight sets, former champion and No3 seed Maria Sharapova.

But the biggest shock was saved for the end, and it all came back to Federer.

Few expected him to struggle against the Ukrainian world No116 Sergiy Stakhovsky, especially after the standard of his play in his 69-minute opening victory. But few expected Stakhovsky to play the way he did from beginning to end of a quite stunning match late into Wednesday evening.

Both came out on fire, in fact, playing full-blooded attacking tennis, serving and volleying on both sides, drops and lobs aplenty, and outright winners on forehand and backhand wings.

But what was immediately clear was that Stakhovsky was reading the Federer serve with relative ease. His returns varied between blistering and crafty, slanting past a Federer racing the net or landing at his feet.

It was, indeed, the Ukrainian who worked a first break point but Federer defended two deuces to go 5-4.

He had to do so again on his next serve, as Stakhovsky repeatedly attacked the net with some stunning volleys. But they headed to a tie-break, which Federer edged 7-5.

And the second set unfolded along the same lines: first-strike, gloriously attacking tennis from both. The error count was low, the serving standard high and the net work and single-handed backhands that they both wielded were in fine form. This time, it was Stakhovsky who defended break points in the 11th game but big serves save the day—and they would throughout the match. They headed to another tiebreak that developed in precisely the reverse of the first: Stakhovsky took it, 7-5.

There was still little to choose between them. Federer must have expected his opponent’s level would drop: Here was a man who had won only two from four previous Wimbledon matches, who had won only eight matches from 18 this year.

But it didn’t. Even though Federer was playing to a high standard – attacking, making few errors – he could not convert his break chanced in the second game, and Stakhovsky held with his 12th ace of the match. With two hours on the clock, they reached 5-5 with still no breaks to either man, but then Stakhovsky struck, broke in the 11th game and served out the set 7-5. Now the Centre Court was abuzz with disbelief, excitement and disbelief again.

Here was tennis of the highest order, yet Federer could do little to stem the tide.

The Ukrainian had an answer for everything, lunging across the net, slicing at Federer’s feet, serving with pace and accuracy—in fact the complete grass-court package.

And shock struck again, with Stakhovsky breaking at the start of the fourth set, but Federer responded in the sixth. Perhaps this was a turn in the tide.

And that was just the edge that carried the Ukrainian to the finish line.

Federer had the chance to take the set with a break point at 6-5, but Stakhovsky saved it with a brave serve and volley play once again and they concluded the match, appropriately, with another tie-break, and again it was decided 7-5 to Stakhovsky.

By the match’s conclusion, Federer trailed by a single point, 161-162. He made only 13 errors to 57 winners, but his opponent’s attacking play was eloquently shown in his 72 winners to only 17 errors.

The No117 ranked man was, understandably, as shocked as everyone else: “I’m in disbelief that it happened. I was playing my best tennis I ever played and it almost wasn’t enough to beat Roger. I’m incredibly happy.

“When you play Federer at Wimbledon, it’s like you’re playing two people: Federer and his ego on Centre Court at Wimbledon, where he’s historical. I was hoping I would have a chance to be in the match at the beginning. I was just hanging in there on my serve, trying to get to tie-break. I was a little tight up a break in the fourth, it was hard to pull it out. I’m really happy to go through.

“It was magic. I couldn’t play any better today.”

It was his first top 10 win in 21 attempts and ended Federer’s run of reaching 36 successive Grand Slam quarter-finals. And it was the Swiss’s earliest loss at a Grand Slam since falling in the 2003 Roland Garros first round.

And the seven-time champion had no choice but to look ahead.

Credit to him for closing it out under enormous pressure,” said Federer, reflecting on his first defeat to a player outside the top 100 since 2005. “He was better in the more important points today than I was.

“It’s very frustrating, very disappointing. I’m going to accept it and move forward from here. I have no choice.

“I’m very disappointed. Losing at Wimbledon always has been that way – it will never change. I’ve just got to get over this one. Some haven’t hurt this much, that’s for sure.”