Wimbledon 2013: Rafael Nadal is confirmed as the fifth seed at the All England Club, while Andy Murray is placed as No2 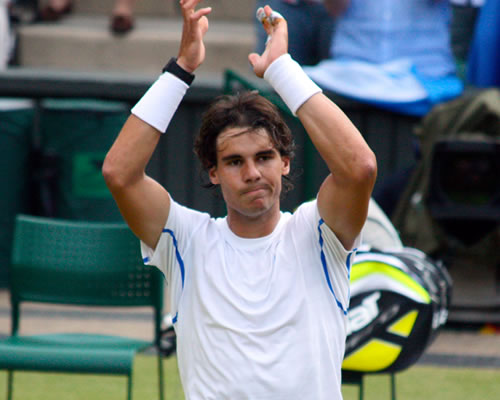 As anticipated when Rafael Nadal failed to climb back to No4 in the rankings after the French Open, the Spaniard has not gained enough ‘grass credit’ from the Wimbledon formula* to gain the No4 seeding at The Championships which start next Monday.

Despite winning his 12th Grand Slam, a record eighth at Roland Garros, less than a fortnight ago, Nadal made fewer points than his compatriot David Ferrer, who by reaching his first Major final, earned enough extra points to overtake Nadal. And despite the credit that Wimbledon uniquely factors into its men’s seedings, Nadal remains outside the top four.

It means that, when the draw is made on Friday, Nadal has a three-in-four chance of meeting Novak Djokovic, Andy Murray or Roger Federer in the quarters.

There have been a few adjustments to the men’s seedings—the women’s WTA rankings are not affected by the same ‘surface formula’—but only in two cases do the adjustments make a significant difference.

The No18-ranked Philipp Kohlschreiber has been seeded No16 on the back of a semi finish in Halle and quarter finish in Wimbledon last year. That means he cannot meet a higher-ranked player until the fourth round. However, world No15, Milos Raonic, who has been pushed down to a No17 seeding, will be drawn to face a higher-ranked man in the third round.

The most credit has been given to No28 Mikhail Youzhny, quarter-finalist at Wimbledon last year and the losing finalist in Halle last week, who is boosted to No20.

Andy Murray retains his No2 ranking, and while he cannot therefore meet top man Djokovic before the finals, he could this time around meet the man who beat him in the title match last year, Roger Federer, in the semis.

Two other British men have been give wild cards places in the main draw, James Ward, ranked 216, and 18-year-old Kyle Edmund, ranked 442. The teenager, who won the boys’ doubles at French Open, won his first senior tour match this week in Eastbourne.

Daniela Hantuchova won her first grass title from three finals in Birmingham last week, to jump 12 places to No48 in the rankings;

Simona Halep rose 13 places to No45 this week after sealing her first title—albeit on clay—in Nurnberger;

Andrea Petkovic, a former top-10 player before repeated injury problems, was the week’s biggest riser, from 103 to No75 after her runner-up finish to Halep;

The top-100’s youngest player, 16-year-old Donna Vekic, rose to No64 after her runner-up finish in Birmingham.

* The seeds are the top 32 players on the ATP Entry System Position (ESP), but then rearranged on a surface-based system. Since 2002 a seeding committee has not been required for the men’s singles following an agreement made with the ATP. The seeding order is determined using an objective and transparent system to reflect more accurately an individual player’s grass court achievements.