Wimbledon 2013: Serena Williams and Agnieszka Radwanska remain on course for a repeat of the 2012 SW19 final 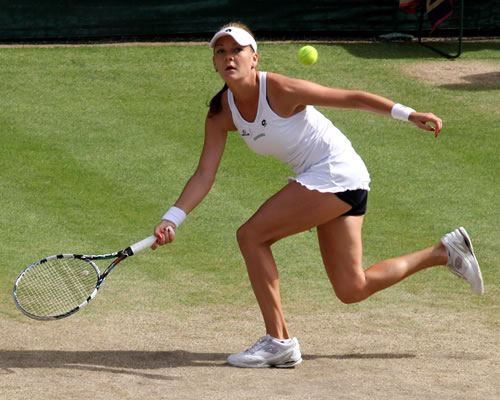 At the start of the first week of Wimbledon, there were two key questions about the women’s draw. First, could anyone halt the progress of defending champion and No1 seed, Serena Williams, and second, who was the more likely to enjoy the challenge of facing Williams in the final: No2 seed Victoria Azarenka or No3 seed Maria Sharapova—all three multiple Grand Slam champions.

By the time the second round was done, the second question was redundant. Azarenka withdrew with an injury sustained from a fall in her first match and Sharapova lost, after a couple of falls of her own, to Portuguese qualifier Michelle Larcher de Brito.

Indeed none of the five former No1s in the bottom half of the draw made it past the second round.

No22 seed Sorana Cirstea and No27 seed Lucie Safarova also went out, and with No5 seed Sara Errani losing in the first round, the 2011 Wimbledon champion Petra Kvitova became the top seed in this section and favourite for that spot against Williams in the final. Not that she had to prove her worth: She advanced via a walkover from Yaroslava Shvedova.

So with the bottom half of the draw looking as depleted a the men’s—where Rafael Nadal and Roger Federer opened up their half with early exits—it was down to the women in top half to pull out the tops, and they did just that.

One former Grand Slam champion, Sam Stosur, was done and dusted before play had even started on Centre Court, with a 6-2, 6-2 win to match the mere four games she dropped in her first match.

She now faces a formidable challenge in the third round from Sabine Lisicki, who is proving once again that grass is her metier. She has raced through her first two matches, recalling the form that took her to a semi-final and two quarters in her last three visits to Wimbledon.

Another Major winner, Na Li, took three sets to advance and will next play No32 seed, Klara Zakopalova.

But what of that first question, what of Serena Williams?

Well the question remained in the air for the time being: She had no intention of giving her opponents any glimmer of hope as she dismissed her second opponent, the French teenager 12 years her junior, Caroline Garcia, 6-3 6-2. Williams served nine aces, 30 winners and not one double fault. No wonder she is such a hot favourite, even on the surface that has caused so many of her colleagues problems:

“Seeing all the falls and slips yesterday, I went in with a mind frame of be careful and be ready. But I could play on any court—they all seem the same to me.”

It took her just 67 minutes and extended her match-winning streak to 33, second only to sister Venus on 35.

She is also on the verge of her 600th career win, and in truth, it’s hard to see her failing to reach that milestone on the court she has made her own: five singles titles, five doubles titles and Olympic gold.

Williams next plays Japan’s Kimiko Date-Krumm, the petite 42-year old who beat Alexandra Cadantu, 6-4 7-5, to become the oldest woman to reach Wimbledon’s third round since the Open era began in 1969.

Williams has never played her before, but her sister was one half of a great match against the Japanese woman at Wimbledon two years ago, a 6-7, 6-3, 8-6 victory for Venus. Now if Date-Krumm could exact revenge, that really would be an upset.

But things are building steadily towards a semi-final replay of last year’s final between the defending champion and the unconventional No4 seed, Agnieszka Radwanska.

It was Radwanska’s first return to Centre Court since her determined and bold challenge pushed Serena to three sets last summer. But it is still hard to reconcile the 24-year-old Radwanska—a Wimbledon junior champion in 2005—with a run of 29 consecutive Grand Slams, eight consecutive Wimbledon’s, yet such is the case.

Reaching the final last year took her to a career-high No2 ranking and she ended the year with a career-best 59 match-wins. But despite starting 2013 in great form with back-to-back titles and a quarter-final finish at the Australian Open, her results have fluctuated since.

Nevertheless, Radwanska has the court craft to cause problems on all surfaces, and she reached the quarters of the French Open, too. She may not be a player in the power mould of Williams, Sharapova or Kvitova, but she has wonderful footwork, great touch on slice and volley, and a smart tactical game. It is a popular package that has twice made her the “Fans’ Favourite” in the WTA player awards.

Here she took on Mathilde Johansson, but it never looked a battle of equals. Johansson had yet to win back-to-back main-draw matches this year and despite pushing Radwanska to deuce in the opening game of the match, and holding her first service game, she could not win another game in the 6-1 opening set.

Even in defence, Radwanska was vastly superior, tracking down drop shots and then racing back to pick up a lob on several occasions. She broke quickly in the second, but Johansson piled on the pressure with her big forehand to break back—and in fact made more winners than her opponent.

But she struggled to handle the wicked slice and disguise of Radwanska and made far too many errors to capitalise: 29 to her opponent’s seven.

Even a drizzly rain break while the roof was closed over Centre Court could not revive the French woman’s fortunes. At 3-5 down, Radwanska slotted a lovely backhand down the line to earn break point and sealed the match with a high backhand volley winner.

She has played her next opponent, American Madison Keys, once before—a 6-1, 6-1 trouncing in Miami last year, and so memorable that she didn’t even remember it when reminded in press:

“Can’t remember that match, to be honest. I thought I never played her before. But I saw her in the tournaments this year, and I think she improve a lot. She’s really playing good tennis right now. Will be tough, for sure.”

Certainly the teenager is a vastly improved player since then, and has scored wins over the likes of Safarova, Tamira Paszek, and also Li in Madrid. She was hugely powerful in beating Heather Watson in the first round and then took out the No30 seed Mona Barthel in straight sets in the second.

One suspects Radwanska will remember her this time around.