Wimbledon 2013: Serena Williams says she has no issues with Maria Sharapova, despite the smouldering conflict between the pair 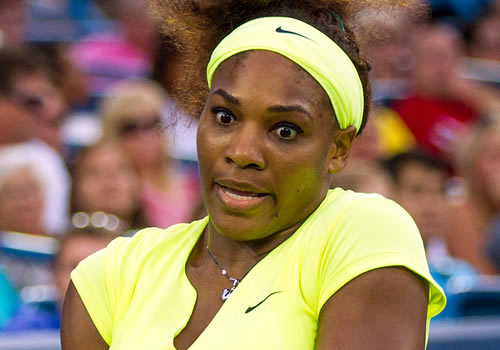 Serena Williams is the defending champion at Wimbledon Photo: Mirsasha/Flickr

Serena Williams insists she has no issues with Maria Sharapova and says she has apologised to the Russian in an attempt to quell conflict that has been smouldering between the pair in the build-up to Wimbledon.

Their frosty relationship was thrown into the spotlight on Saturday when Sharapova said that Williams should not talk about anyone else’s private life because her own is far from perfect.

The thinly-veiled dig from the Russian came days after Williams was quoted as describing a top-five player – thought to be Sharapova – as “boring” and appeared to refer to the Russian’s relationship with Grigor Dimitrov, who is rumoured to have briefly dated the American.

In a recently-publish interview with Rolling Stone magazine, Williams said: “She begins every interview with ‘I’m so happy. I’m so lucky’ – it’s so boring. She’s still not going to be invited to the cool parties. And, hey, if she wants to be with the guy with a black heart, go for it’.”

Sharapova responded on Saturday and appeared to allude to Williams’ alleged romance with coach Patrick Mouratoglou. The pair have been pictured together a number of times but have not publicly confirmed their relationship.

The Russian said: “If she wants to talk about something personal, maybe she should talk about her relationship and her boyfriend that was married and is getting a divorce and has kids.”

However, a calm and composed Williams moved to play down the reports of a feud between the pair at her pre-tournament news conference on Sunday.

“I was told of [Sharapova’s] comments but I definitely like to keep my personal life personal,” said Williams, who also explained that the interview with Rolling Stone took place several months ago. “I think it would be inappropriate for me to comment on it.

“In the past – you guys have known – I’ve always kept my personal and professional life very private. I’m going to continue to do that.”

Williams went on to reveal that she had personally apologised to Sharapova for “being brought into the situation” at the WTA pre-Wimbledon party in London last week.

“I made it a point to reach out to Maria because she was inadvertently brought into the situation by assumptions made by the [Rolling Stone magazine] reporter,” she continued.

“I personally talked to Maria at the player party. I said: ‘Look, I want to personally apologise to you if you are offended by being brought into my situation. I want to take this moment to just be open and say I’m very sorry for this whole situation’.”

She added: “I feel like Maria, unfortunately, was inadvertently brought into a situation she should have never been brought into.

Williams, the defending champion at SW19, and third seed Sharapova have been drawn into opposite halves of the field and could meet in the final this year.

And the American 31-year-old, who beat the Russian in straight sets to win the French Open earlier this month, would relish the chance to face Sharapova again in the final.

“I think Maria and I have great matches,” she said. “I think it’s great for women’s tennis when we play each other. The same when Venus and I play each other, or me and Victoria [Azarenka]. When we’re in the final, it’s a really, really good match-up.

“I think we both have so much intensity on the court, and we just really love the game.

“I think it will be a great final. I hope to be there. There’s no guarantee that I’ll be there, but I’m definitely hoping that I can play and win seven matches.”

World No1 Williams went on to say that she will look to take Sharapova’s advice about focusing on matters on the court instead of drawing attention to issues off it.

“I have the most respect for Maria on and off the court,” said Williams. “That’s another reason why, being a woman, I wanted to reach out to her and say: ‘look, this is this, this is this, sorry.’

“I know she also said that I should focus on the tennis here, and I feel like that is another thing I can definitely take her advice on.

“Maybe I wasn’t focused enough in the past on tennis. I’m definitely going to try to focus on that for the next two weeks.”