Wimbledon 2013: Sloane Stephens through to last 16

Wimbledon 2013: Sloane Stephens books her place in the last 16 with a three-set victory over Petra Cetkovska at SW19 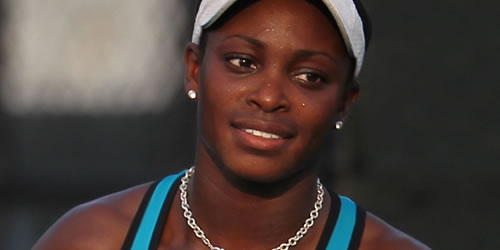 Sloane Stephens is through to the last 16 at Wimbledon Photo: K Allison, via Wikimedia

Sloane Stephens overcame bad light and a tough opponent to book her place in the last 16 of Wimbledon with a 7-6 (7-3) 0-6 6-4 win over Petra Cetkovska.

The match began on Friday and the 20-year-old American took a tight first set against her Czech opponent after a tiebreak.

However, the American was unhappy about the decision to carry on playing despite the poor light. She said: “I think it was a little tough, because at the end of the first set I couldn’t see anything. I was like, OK, this is going to be interesting.”

Stephens lost the second set 6-0 but refused to put that solely down to the conditions, adding: “Obviously it wasn’t all because I couldn’t see. She was playing well. It is what it is.”

The 17th seed returned rejuvenated on Saturday afternoon though, taking the third set 6-4, and is now looking forward to the second week of a Grand Slam again after achieving the same feat at both the Australian Open and French Open this year.

“It’s been good,” she continued. “I played the Slams well and I’m excited to be in the second week again. I’m playing well and feeling good, so I guess that’s always a good thing.”

With Stephens impressing again, the prospect of an all-American final between her and Serena Williams is still on the cards – but the 19 year old isn’t getting carried away.

“That’s a long ways off,” she continued. “If we get there, we get there. If we don’t, there will be more opportunities. But I think you can’t predict what’s going to happen. We’ll just have to see about that.”

To have any hope of reaching the final, Stephens will first have to conquer Monica Puig in the last 16 after the Puerto Rican came from a set down to beat Eva Birnerova on Saturday.