WTA Eastbourne 2013: I had chances, says Robson after loss 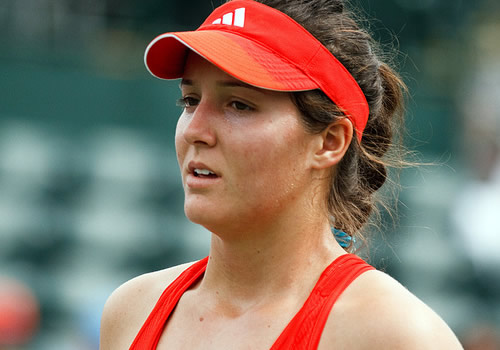 Laura Robson is ranked No35 in the world Photo: Mirsasha/Flickr

Laura Robson’s Eastbourne campaign came to an end after she was dumped out in the second round of the WTA Aegon International 6-4 6-4 by Caroline Wozniacki.

The British number one faced up against the former world number one just three weeks after suffering defeat at the hands of the Dane at the French Open.

But the 19-year-old failed to take advantage of Wozniacki’s poor form in Paris and was unable to make amends on the south coast.

Robson said: “I guess it was better than when I played her in Paris.

“I think I definitely had chances, and I got myself into a very good position in the points sometimes and just couldn’t finish it off.

“It’s just a bit disappointing but obviously in general better than Paris.”

Robson was impressive in dispatching Ukrainian qualifier Yuliya Beygelzimer on Tuesday and on a number of occasions she outplayed the Dane today, going ahead in the opening set, but paid the price for making too many unforced errors.

She added: “Today there were a lot of points where I set everything up and did all the right things and then just missed the last forehand, which isn’t something that I usually do, because I usually feel confident in that shot.

“You have to look at the positives ahead of next week and I’m going to get back to Wimbledon and have a couple of days’ practice before the first round.”

Robson is preparing for what will be her 11th Grand Slam appearance at Wimbledon next week under the guidance of temporary coach Miles Maclagan.

She continued: “I’m happy playing on any court against any player and I’m just happy to be playing at Wimbledon.”