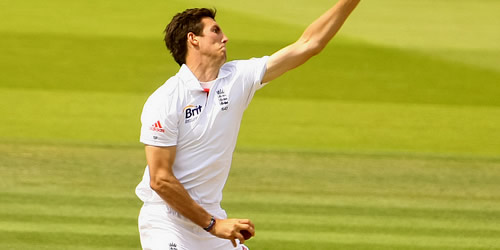 Steven Finn believes England batsman Nick Compton must keep scoring runs if he wants to win his Test place back.

Compton, 30, was not selected for this week’s warm-up match against Essex, leading to speculation that rising star Joe Root will be bumped up the order to open with Alastair Cook when the first Test gets under way at Trent Bridge on Wednesday.

Despite claiming he wasn’t given “a fair crack of the whip” by selectors, Compton has knuckled down to hit two fifties against the tourists for Somerset and Worcestershire, who he guested for this week.

“It must be very disappointing for him,” said Finn, who has faced the axe at times in his England career too – most notably when he was dropped midway through the 2010-11 Ashes Down Under after initially impressing in the first Test at Brisbane.

Finn is well aware that only good performances rather than barbed comments will ensure selectors take notice of you.

“I have been there before when you are dropped and it is a tough place to be,” added the fast bowler, who is an ambassador for ESPN Classic’s Ashes coverage.

“The best way he could go about it and the best way I went about it when I got dropped, is to dust yourself off and try and give the selectors no reason to leave you out again.

“So, you go out and take wickets or score runs. He has scored two half-centuries in the games he has played against Australia so far. There is not a lot more he can do.

“The selectors make the decisions and they will stick by them. If Compo keeps scoring runs I am sure he will still be in the mix.”

ESPN Classic will broadcast extensive Ashes programming every weeknight throughout July, celebrating one of the fiercest rivalries in international sport. Visit espnclassic.com for details.