Ashes 2013: Steven Finn says he isn't concerned by his battle with Tim Bresnan to start England's opening Test against Australia 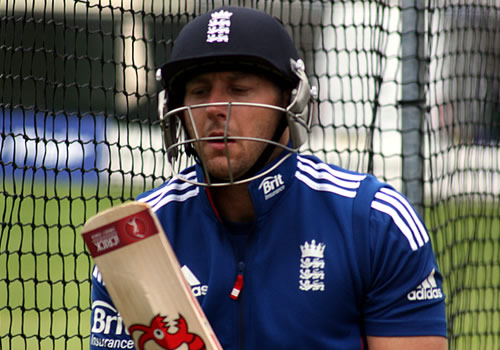 Tim Bresnan scored a century against Essex this week. Photo: The Sport Review

Steven Finn insists he is not worried about his battle with Tim Bresnan to start the Ashes – and instead is just happy English cricket is in such good health, with all the competition for places.

The England side to face Australia is all but decided apart from the third seamer position, with both Finn and Bresnan vying for the final slot.

For what Finn lacks in batting ability he makes up for in weight of wickets compared to the economical Bresnan, who scored a century in England’s practice match against Essex this week.

“It is nice to have lots of competition there for us,” Finn told The Sport Review. “We, as a team, like to put ourselves in pressure situations – to have people breathing down your neck is healthy for us.

“We’re lucky to have pool of fast bowlers who are all capable of coming and playing for us.”

Warwickshire’s Boyd Rankin or Durham seamer Graham Onions could also feasibly contest for that final berth in the side too.

Rankin bowled with hostility and pace in the final morning against Essex, duly impressing England head coach Andy Flower in the process.

Onions, meanwhile, collected five wickets in the match, including four in the second innings to remind the selectors of his talents.

If Finn does start the landmark series, the Middlesex bowler stands a good chance of surpassing a 100 Test wickets, yet he says he hasn’t given the idea much thought, even though he currently has 88 dismissals.

“A 100 Test wickets would be a great achievement for me,” added Finn, who is an ambassador for ESPN Classic’s Ashes coverage.

Winning three Tests will ensure England emerge as victors over the next six weeks, so it is therefore surprising they’re not playing at Edgbaston.

England have a remarkable record in Birmingham, having lost only one of the last 10 Test matches there.

Much clamour has been made about decision, with both pundits and fans suggesting that to give England the best chance of retaining the Ashes they should be playing at their favoured grounds.

However, Finn has dismissed the notion, claiming the decision is out of the players’ hands and all the five venues excite the team.

“This is not a decision that we’re privy too,” concluded Finn. “We’re not involved in those discussions. Obviously Edgbaston is a very nice ground – we played a couple of Champions Trophy games there which was good for us and we had some good results there but we’re not in control of where we play our cricket.

“Five grounds have been given to us. It is an exciting time to be playing at those five grounds.”

ESPN Classic will broadcast extensive Ashes programming every weeknight throughout July, celebrating one of the fiercest rivalries in international sport. Visit espnclassic.com for details.