British Grand Prix 2013: Oisin Gregorian reflects on a weekend which was full of controversy at Silverstone 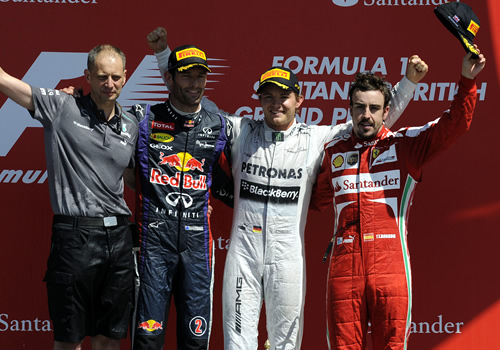 Excitement, controversy, and every other hyperbole in between. One weekend a year in Northamptonshire, Formula 1 returns home for its annual visit to the motorsport valley that is Silverstone.

Upon its conclusion, the sport once again found itself at a crossroad – a crossroad in which critical decisions will be required to be made with haste.

Throughout the 2013 season thus far, there has arguably been one major controversy – tyres.

For Pirelli, it’s often easy to forget that it wasn’t too long ago that these tyres were once introduced to improve the sport as a spectacle.

But it must be argued that Pirelli’s position as Formula 1’s chief tyre supplier has lost both its novelty and its reputation within the sport in three short months.

Four tyre blow-outs marred this year’s Grand Prix. Two of which came in quick succession; one deflated the home crowd’s hopes of yet another home winner, the other raised eyebrows considering it once again concerned the same right-rear tyre suffering an almost identical blowout.

A handful of laps later, a third right rear blowout made the situation a farcical one.

Amongst the controversy, a second-race victory for both Nico Rosberg and Mercedes, and a well-timed win following the team’s questionable reprimand by the FIA following the conclusion to the sport’s tyre-gate saga the weekend prior.

Aided by Sebastian Vettel’s mid-race retirement, his first mechanical failure since Valencia last year, the German drove a faultless race, managing to avoid all the debris and controversy around him.

Rosberg’s victory could prove to be a turning point.

In Monaco, an impressive victory had the cynics still questioning Mercedes’ overall race performance – considering the overtaking nature of the principality’s tight layout. In Silverstone, such cynicism was put to bed as both Rosberg as Mercedes demonstrated that the tyre worries that plagued its early season performance had been put to bed.

In second, Mark Webber’s final visit to Silverstone will be fondly remembered for an excellent, last-minute charge. In third, another mighty, admirable struggle to the podium keeps Fernando Alonso’s title hopes alive.

Regardless of the result, Ferrari is in a dire need to improve to overall performance; Vettel will not have too many more weekends like this down the line.

For Pirelli, the controversy of Silverstone only heaps further pressure on them to provide a tyre that not only provides safety for all, but also exciting racing for the fans.

Whilst tyres with a high rate of degradation have provided some of the sport’s more memorable races in recent seasons, safety remains Formula 1’s undoubted number one concern.

Does Formula 1 improve the durability of its tyres at the risk of ruining the spectacle ? Fans and drivers must be careful what they wish for here.

Nevertheless, two failures in quick succession were bad enough; four within 52 laps of high-speed racing spewing debris into the path of those behind was simply not good enough – change is desperately needed.

Over the next week, the FIA will meet with Pirelli once more in Paris to discuss the issue and hopefully, for the sport’s case, start the ball rolling with regards to a simple yet effective compromise that will appease the majority.

With just a week’s turnaround between Silverstone and the Nürburgring, there will be no quick fix, just the pre-determined tyres for the weekend itself – and how Pirelli must get this decision spot on.

One thing’s for sure, should there be no concrete conclusion made before the start of the season’s crucial flyaway leg following the summer, both Formula 1 and Pirelli could well finish the season shrouded in regret.

Driver of the weekend: Webber – for the occasion it was in following his decision to retire from the sport at the end of the weekend – a fitting visit to the podium in front of his adoptive fans.

Good weekend: Alonso thanks to one single retirement up the road; Daniel Ricciardo for another points finish on the weekend in which the Red Bull seat opened up, and Paul di Resta for managing to fight his way into the points following his disqualification from qualifying 24 hours previously.

Bad weekend: Kimi Raikkonen and Lotus for failing to capitalise fully on Vettel’s misfortune; McLaren for another paltry weekend at home and Giedo van der Garde – who will surely face further questions with regards to his seat following another unspectacular weekend.