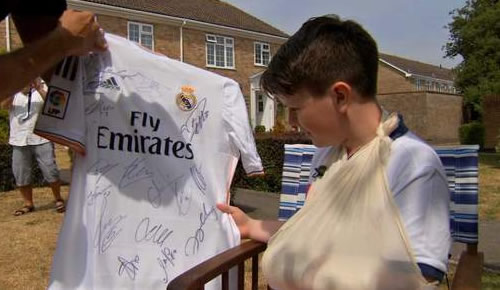 Cristiano Ronaldo has given a signed Real Madrid shirt to a boy who broke his wrist after he was hit by one of the Portuguese forward’s free-kicks during the friendly with Bournemouth last weekend.

Eleven-year-old Bournemouth fan Charlie Silverwood was sitting behind the goal when one of Ronaldo’s dipping set-pieces came flying over the crossbar towards him.

The youngster stuck out his left arm to stop the ball hitting him in the face, and stayed for the remaining 84 minutes of the game. X-rays later revealed a double wrist fracture.

After the game, Ronaldo was informed of the unfortunate incident and sent Silverwood a shirt signed by the whole Madrid squad.

He has also invited him to watch a Real Madrid game at the Santiago Bernabeu next season to compensate for the injury.

“It’s one of the most spectacular ways you can get your arm broken,” Silverwood told Sky News.

“I’d have to say I’d prefer doing it this way then just falling out of a tree like my dad did it.

“You wouldn’t expect this to happen to anybody. If I hadn’t put my left hand up, took the brunt of the force on my palm, I’d have ended up with no front teeth.”

Ronaldo scored twice as the La Liga outfit hammered the Championship side 6-0 in the friendly match.