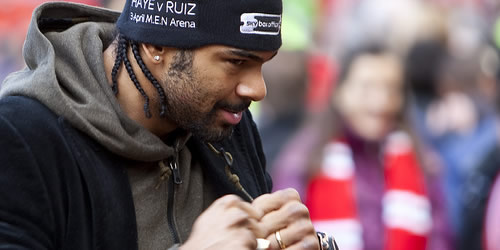 David Haye and Tyson Fury have confirmed that they will do battle in Manchester on 28 September – and tickets for fight are still available on viagogo!

Haye’s most recent fight was his knockout victory in another all-British bout with Dereck Chisora back in July 2012. And the 32-year-old has hailed the forthcoming showdown as great news for British boxing.

“This fight is great for British boxing. The last few years boxing hasn’t had that month-by-month coverage that one would like,” said Haye. “There haven’t been fights out there to generate that but there is with this.

“Even my last fight against Chisora, people said it was a good fight. It was praised afterwards so that helped [and] I think a fight against an unbeaten Fury will do the same thing.”

The 24-year-old Fury, who beat American Steve Cunningham in April to move to 21 fights unbeaten, is convinced that he has what it takes to beat his British counterpart.

“If David can beat me then congratulations to him, he will have put me out of my misery and there will be no hard feelings at all,” said Fury. “A man can only do what a man can do but I believe what I can do will be good enough to beat not only Haye, but the Klitschkos as well.”

With demand already surging for tickets to this fight, why not book your place at the Manchester Arena today?