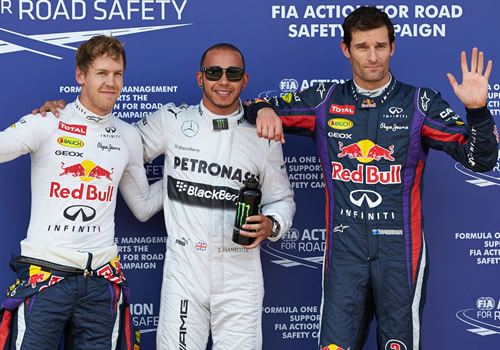 Lewis Hamilton put in a blistering lap to pip Sebastian Vettel and snatch his third pole position of the season for the German Grand Prix.

The Brit edged out home-favourite and championship leader Vettel by just over a 10th of a second with a time of one minute 29.398 seconds.

After the multiple tyre failures at Silverstone and a week dogged by threats of driver boycotts, the session passed without incident.

Pirelli changed the tyres to a Kevlar construction, producing 1000 new tyres in just 72 hours and shipping them to Germany from Istanbul.

Mark Webber put his Red Bull on the second row in third place in front of Kimi Raikkonen, who had his best qualifying session since Spain.

Toro Rosso’s Daniel Ricciardo boosted his chances of taking Webber’s seat at Red Bull as he put in a solid lap to take sixth place, behind Romain Grosjean.

Ferrari’s Felipe Massa looked on top-form throughout the day and was the quickest man in both Q1 and Q2 but failed to perform in Q3, only managing seventh position – out-qualifying Alonso who came eighth.

Jenson Button will start in ninth and Nico Hulkenberg 10th.

There was shock for Nico Rosberg as he was knocked out of Q2 and qualified in 11th place after Mercedes took a gamble by pitting him early in an attempt to save a set of tyres.

There was disappointment for Williams as both their drivers Pastor Maldonado and Valtteri Bottas found themselves in the drop-zone in Q1 in the team’s 600th race.