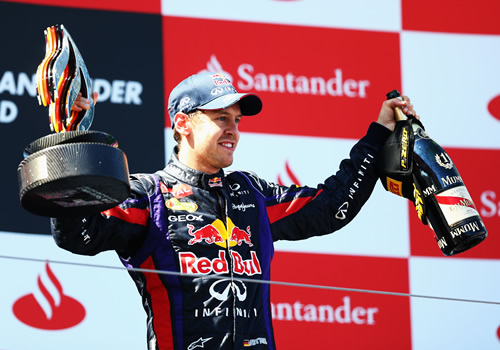 In the end, a finish where the top four drivers were only separated by a handful of seconds proved to be quite an anti-climax at the German Grand Prix.

Sebastian Vettel, unlucky not to win a week ago, laid down again his 2013 credentials with yet another lights to flag, yet another rendition of ‘yeah baby’ over the pit radio, and yet another finger to the camera once out of the car to remind the F1 world of his position within the sport.

Following last weekend’s retirement, which enabled those behind to claw back some of his thus-far impressive advantage, optimism returned to the paddock.

Despite both Vettel and Red Bull dominating on both leader boards, the signs were there that maybe 2013 wasn’t going to be the premature write-off many within the sport feared.

Following a third 25-pointer of the year at the Nurburgring for the two, such optimisms took another beating.

It was the perfect response from both following the disappointments of Silverstone.

Behind, Mercedes were finally beginning to show they meant business on race day. How they wanted a repeat of Silverstone at the Nurburgring, their home Grand Prix. Pole position for Hamilton on Sunday was the perfect start; how they wished it was to stay that way.

On race day, the same problems returned for both Mercedes and Hamilton.

Finding himself third and behind both Red Bull cars at the end of the first lap, his race was effectively done from there.

On the other side of the Mercedes garage, Nico Rosberg endured a torturous home outing with similar race-pace problems.

With the Ferrari of Fernando Alonso also playing yet another game of damage limitation, Vettel’s win effectively cancelled out last week’s disappointments as the 2013 enters a now critical period before the final leg of the season – a period in which the chasing pack must find some much-needed performance.

Fail to find performance, and Red Bull may have one hand on both trophies for the fourth year running come the end of August. Whilst last year’s championship went down to the wire, there are increasing concerns race by race that an inadequate challenge from those behind them, 2013 could be just as shut up shop as 2011 was, where Vettel and Red Bull had both titles wrapped up with plenty of weekends to spare.

Mercedes’ problems are obvious; Ferrari’s pace remains worrying and failure to rectify could mean casualties at the very top of the team’s management while Lotus’ overall performance appears to come and go depending on the circuit.

All the while, Red Bull know the score, and know that with a couple more weekend’s like at the Nurburgring, a fourth consecutive double title will be well within reach.

Driver of the weekend: Hard to look beyond Vettel. Dominant off the line, the German completed his number one objective by the first corner. Despite the safety car bunching up the field and resurgent Lotus which did its best to challenge for the victory in the closing stages, the German held his own to maintain his lead until the very end. While luck deserted him in Silverstone, it was certainly in plenty of supply this weekend, such as the timing of the safety car and the fact that it was Mark Webber, not himself, who once again found problems in the pits. Another 25 points, another inch closer to title number four. Formidable!

Good weekend for: Lotus’s Kimi Raikkonen could have ended up on the top step in the Nurburgring, but will gladly take a solid two-three finish which has allowed them to keep tabs on Ferrari following a difficult few races; Romain Grosjean third place may go some way to repairing what has been a difficult second full season in F1; Nico Hulkenberg, who’s tenth place will give struggling Sauber something to build on, whilst Pirelli will leave Germany with partially rebuilt reputation following a much improved race from their tyres after last weekend’s debacle at Silverstone.

Bad weekend for: Rosberg following a rather anonymous weekend which saw the German go from race winner to ninth place in the space of a week; Williams, who had 600th Grand Prix to forget and Felipe Massa, who suffered yet another retirement – just when the paddock was starting to feel the Brazilian was back to his competitive best.