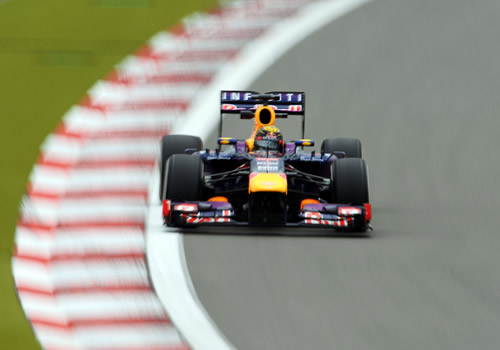 The triple world champion beat his compatriot by 0.235 seconds at the Nurburgring, with his Red Bull team-mate Mark Webber third-quickest and Romain Grosjean’s Lotus fourth.

There were no tyre problems following supplier Pirelli’s decision to bring tyres featuring a different design to Germany.

“I wasn’t so happy with the car this morning and Mercedes were quick, but in the afternoon we were in better shape,” said Vettel. “We’ll see, but so far I am happy.

“To be clear about yesterday and the GPDA meeting: the general agreement was that we’re happy Pirelli bought a new specification of tyre for this event and want to thank them for their flexibility and reaction times – they were able to find a solution in only a couple of days.

“The circumstances that we raced under in Silverstone were not what we can accept, but I don’t think we will see those issues again.”

Force India’s Paul di Resta, who ended up 10th-fastest, admitted he was not feeling entirely comfortable with the new rear tyres.

“It was quite a tricky session with lots to think about overnight,” said Di Resta.

“There’s room to improve the set-up because I’m not feeling as comfortable as I usually do. Tyre-wise we’ve done a lot of running across the two compounds to give us enough data to understand the impact of the new rear tyres.

“The two compounds are different extremes so we need to make sure we can get both in the right operating window.”