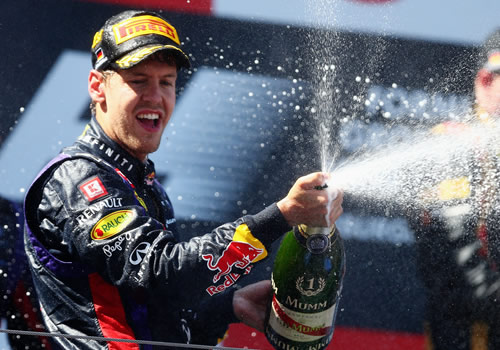 Persistence pays off for Vettel

The pre-race facts and figures meant that the odds were stacked against Sebastian Vettel. It was no secret that the German was desperate to win on what was his sixth attempt to win his home grand prix. And the fact that he had never won a race in July during his career was probably not far from the front of his mind either. But his persistence paid off as he fought to the bitter-end to keep the Lotus cars behind to take a much-deserved 30th career victory – boosting his hopes of a fourth championship.

Last week at Silverstone there were fears about exploding tyres and thankfully the changes Pirelli made to the structure paid off. However, this race there was a very different problem that raises serious questions over the safety of the sport. Two unsafe releases overshadowed the day and begs the question of just how many people should be allowed in the pit-lane at one time? Fortunately the British cameraman was not seriously hurt, after he was struck by a flying tyre, but the situation could have been much worse. Often unsafe releases are just punished with fines and this looks to be the case with Paul Di Resta this weekend – but is a fine justice for these multi-million pound teams?

Mercedes take one step back as Sauber take one forward

Mercedes haven’t had the best weekend, with the team’s gamble in qualifying backfiring – and their race performance was not much better. At one time they seemed to be serious contenders for the constructors’ championship but this weekend shows that their tyre woes are well and truly back. It was a poor race for the team with Lewis Hamilton only managing fifth, despite starting on pole and Rosberg was behind in ninth. It’s all well and good to get your team on the front row for the race but the effort seems pointless when the cars have such a poor set-up for race day.