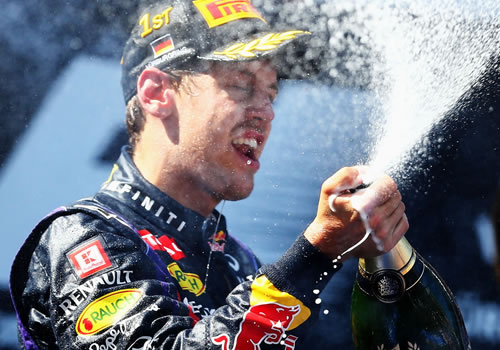 Sebastian Vettel was all smiles after he won a tough German Grand Prix – the first time he has ever trumped on home soil.

It was the German’s 30th career victory and he is the first home driver to win at the Nurburgring, he joins Michael and Ralf Schumacher as the only Germans to have won their home race.

“It’s unbelievable,” said Vettel. “I am very, very happy. Kimi [Raikkonen] was pushing very close in the end but I was pushing in every lap except from the ones with the safety car.

“I enjoyed today and I could feel Kimi coming and it was quite close with Romain too but we recovered and I am very happy the race ended after 60 laps and not 61 or 62 laps.”

He also revealed that his Kers system stopped working for a few laps towards the end of the race, until it spluttered back to life in the closing stages.

Kimi Raikkonen, who came second, also fell victim to technological problems and revealed that his radio worked intermittently during the race.

“My radio only worked in one part of the circuit and unfortunately today there was quite a lot to discuss,” he said. “It’s not ideal. We did well but we didn’t have the speed.

“Maybe the race could have been a little longer. The result wasn’t ideal for us but we are getting back to where we should be.”

Meanwhile, third-placed Romain Grosjean thanked his team after he finished in the points for the first time since Bahrain.

He said: “It’s good, it is a good result for the team. I thought I had a good chance but Sebastian drove very well.

“The team took the decision to put us on different tyres and it worked out in the end. It’s good to be back on the podium.”

Elsewhere, Red Bull team principal Christian Horner expressed his regret over Mark Webber’s disastrous pit-stop, when a tyre flew off a hit a nearby broadcaster.

An FIA statement read: “During the German GP an FOM cameraman in the pit lane was struck by a loose wheel.

“Paul Allen was hit on the left hand side, remaining conscious, he was treated at the circuit medical centre and then transported by helicopter to Koblenz Hospital.

“The Briton has been kept there under observation.”