Grass-court artistry earns Nicolas Mahut his time in the sun

Nicolas Mahut wins the title at the Hall of Fame Tennis Championships, beating Lleyton Hewitt in three sets on the grass 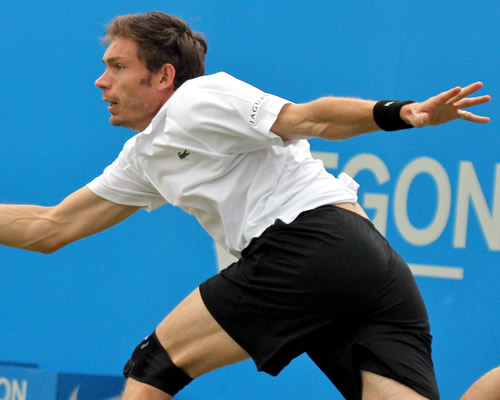 It is just one short week since Wimbledon was making all the headlines.

The most famous tennis tournament in the world climaxed with its first British men’s champion in 77 years, Andy Murray, and there was a brand new Grand Slam champion on the women’s side, Marion Bartoli. Along the way there was the dismissal of Rafael Nadal in the first round, Roger Federer, Victoria Azarenka and Maria Sharapova in the second, and hot favourite Serena Williams in the fourth.

By this weekend, though, tennis had gone on its closest thing to a vacation in its December-to-November calendar.

The weeks between Wimbledon and the first big tournaments of the US Open Series—in Canada, Cincinnati and finally New York—are usually a breathing space for the biggest names, but they are also a chance for those outside the top ranks to return to European clay and build up extra points ahead of the hard courts of America.

But this first ‘holiday’ week has proved to be anything but low profile because of some rather special achievements at the trio of post-Wimbledon 250s.

At the most popular 250 on the tour, the Swedish Open in Bastad—10 times voted the men’s tour favourite—the 30-year-old Carlos Berlocq won his first title in only his second career final. The ninth over-30 champion this year, it earned him a 28-place jump in the rankings to No46.

Shortly after that came news of another first-time champion on the clay of Stuttgart, where Fabio Fognini became the sixth new name on the title-roster of the ATP this year. The 26-year-old Italian has been making waves for some months, and not just because of his exuberant personality. He reached his first two finals last year, and reached the semis in Acapulco and the Monte Carlo Masters this year—beating Tomas Berdych and Richard Gasquet along the way. He edged to career-high rankings this summer, though with the last of the year’s clay coming at the end the month, his next challenge will be to take his success onto the hard courts, too.

But each of these tournaments and champions faded against the story that unfolded a few hours later across the Atlantic in one of the oldest tennis events in the world in Newport, home to the Hall of Fame Tennis Championships.

The only post-Wimbledon grass tournament of the year is played in the intimate club-like surroundings that hosted the first US National Lawn Tennis Championships in 1881.

The only remaining American grass event has always attracted a strong home draw, and the last decade has been packed by North American champions, among them the only under-30 player in this year’s semis, John Isner. But he was up against an array of age and experience. For the third time this year—and the other two also came on grass, in Halle and s-Hertogenbosch—the last four comprised three men in their 30s who, with a combined age of 126, made this the oldest semi-final in ATP history.

Isner took on 32-year-old Lleyton Hewitt in a repeat of last year’s final. But Hewitt, one of the most successful grass court players on the tour, had already reached the semis at Queen’s this year by beating Grigor Dimitrov, Sam Querrey and Juan Martin del Potro, and now gained revenge over Isner in three sets.

That set up a final against Frenchman Nicolas Mahut, who beat 35-year-old Michael Russell to reach only his fourth career final. Mahut’s first two were six years ago, at Queen’s and here in Newport. But it was his third that was most significant: It came just a month ago in s-Hertogenbosch, where he won his first ever title.

The Newport final, though, was special on many levels. With Berlocq having sealed the title in Bastad, Newport guaranteed a 10th over-30 title-winner this year from a total of 14 over-30 finalists.

What’s more, Hewitt and Mahut had been forced to play their semis earlier the same day, after Saturday was washed out by rain.

Both men were enjoying season-high rankings following extended injury problems. Hewitt was at No233 when he played Newport last year but was now up to No64. Mahut’s win as a qualifier in s-Hertogenbosch took him from No240 to No127, the lowest ranked player on the tour to win a title in five years.

In Newport, he later expressed his gratitude at being offered a wild card entry on the back of his Netherlands title: “It had been my goal for a long time to win a title. Six months ago I didn’t know if I would be able to play professional tennis again and here I am with a trophy.”

And then there was the contest itself. Hewitt won the first set after multiple breaks of serve, Mahut the second after Hewitt had the chance to serve out the match, and the Frenchman came back from 3-1 down in the third to win five straight games and the title, 5-7, 7-5, 6-3.

Not content with that, Mahut, despite numerous falls on the slippery out-grass of the Newport court and with his knee heavily strapped, returned for his third match of the day in the doubles semi-final.

He teamed up with countryman Edouard Roger-Vasselin to beat the No4 seeds, Marcelo Demoliner and Andre Sa, 6-4, 7-6. The final was scheduled bright and early on Monday morning—by which time, Mahut would see a new singles ranking alongside his name: No75.

Mahut has, along with so many other men this year, helped to redefine the age profile of the tennis tour. Alongside the 10 titles to over-30s there has been one for the youngest, 20-year-old Bernard Tomic, one for the next youngest, 22-year-old Milos Raonic, and one for 23-year-old Kei Nishikori.

And when the profile is narrowed down to grass, the contrast becomes even more pronounced. Four of the six tournaments on the turf were won by over 30s, with Wimbledon and Queen’s going to Andy Murray—who is ranked just behind Federer and Hewitt in active grass-court match-wins.

In the Dutch tournament, Mahut was joined by 32-year-old Xavier Malisse, 30-year-old Guillermo Garcia-Lopez, and 28-year-old Stan Wawrinka, in the semis. Three of the four men had a single-handed backhand and, with it, those vital grass-court weapons, a slinky, angled slice and the most natural volley action.

In Eastbourne, Feliciano Lopez also has an aggressive left-handed serve-and-volley game. In Halle, Federer was the winner out of four single-handed backhands, all of them except Gasquet owned by an enthusiastic over-30 all-courter with strong net skills. Mikhail Youzhny went on to the final, Haas did not, but won the Halle title last year.

And two among the current rising stars, Dimitrov and Jerzy Janowicz, have made strong impressions on grass. The former reached the semis of Queen’s last year, the latter the semis of Wimbledon this, both courtesy of attacking games and a wide range of weapons.

Maybe more opportunities to use the wide potential of grass—or rather, provide players with the chance to use a different package of skills—would bring still more new names to the surface. How many had noticed the old-fashioned game of Igor Sijsling before he made good runs at Queen’s and Wimbledon? Or Dustin Brown and his serve-and-volley rush through qualifying and past Hewitt to Wimbledon’s third round?

One thing is certain. Nico Mahut has at last earned deserved headlines for something other than his resilience and courage in living with Isner through Wimbledon’s longest ever match in 2010.

That day, he lost, 68-70, in the final set, though many will not remember that he had also survived a five-setter in the match before and a 24-22 set in the one before that…for what abides, watching Mahut play, is not his muscular endurance. Rather, it is his fleetness of foot, the efficient, easy action of his serve and volley, his remarkably quick eye for reading his opponent, for his brave net-attacks on his second serve, on his opponent’s serves, even against a returner of the reputation of Hewitt.

It is not in his body-language that Mahut is extrovert, flamboyant, or aggressive, just in his tactics. He is, indeed, a quietly spoken character within a stable of Frenchman bursting with huge personalities—the likes of Jo-Wilfried Tsonga and Gael Monfils. But Mahut’s tennis is a breath of fresh air, and it blossoms on the fast, slick grass.

He followed up his singles title by winning the doubles crown alongside Edouard Roger-Vasselin against Tim Smyczek and Rhyne Williams in the final.

From 2015, Wimbledon will be moved back by a week in the schedule to leave a longer transition from the clay of Roland Garros to the grass. Already Stuttgart has agreed to switch from clay to an earlier grass event, but how the fine old environment of Newport, with its week in the schedule usurped by Wimbledon and separated from its grass siblings by the Atlantic, will fit into the new schedule remains to be seen.

For now, it can delight in the last grass-court match of the season, the Hall of Fame doubles, featuring the consummate grass-court tennis of its singles champion.

ATP Tour summer schedule: who, when and where