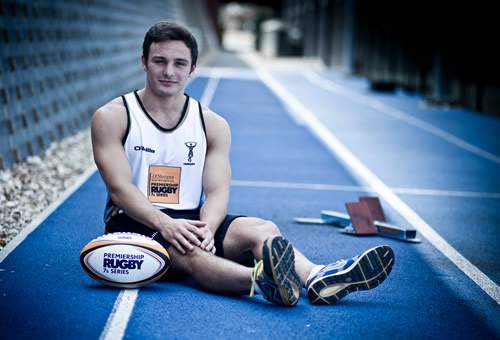 Jordan Burns doesn’t do things slowly so it is no surprise that the speedster is keen to make an immediate impression with Harlequins – eyeing up this weekend’s J.P. Morgan Asset Management Premiership Rugby 7s Series as the ideal platform to do exactly that.

Two years ago Burns set an Epsom College record when he ran 100m on a grass track in 10.8 seconds.

In the time since the 19-year-old has been busy training at Harlequins as they bid to turn him from a winger into a scrum-half.

He has so far found opportunities in the first team hard to come by – making just three appearances off the bench last season for a total of nine minutes – but he has featured in the last two J.P. Morgan Premiership Rugby 7s Series.

And, as he continues to make a name for himself as one of the country’s quickest players, Burns is relishing the 2013 instalment – hoping it is third time lucky as he attempts to make a statement to the club’s hierarchy.

“I do like being known as a bit of a speed merchant. It’s good because I’m not known for my size – I’m not the biggest guy.

“People look at me and think I’m a tiny, tiny person, but they don’t realise when I actually get the ball I can go around them.

“We’ve actually got a lot of speed merchants at Harlequins. Ollie Lindsay-Hague, Charlie Walker and Sam Smith are all very quick and can all score tries.

“Once it gets closer you get more excited about it – a lot of people love to watch 7s because it’s such an open game and a lot of tries are scored.

“I didn’t really get to do what I wanted to do last year because of the space and I wasn’t really experienced back then. I also made some wrong decisions, but that happens when you are young.

“Hopefully this year I will get the start and I will be able to show what I can do.”

Burns spent much of last season focussing on his conversion to scrum-half in the XVs game and, with injuries and international call-ups playing a part, ventured onto the Harlequins bench on a few occasions.

And he insists XVs has his full attention, despite the obvious attraction of 7s for the game’s quicker players with it set to feature at the 2016 Olympics in Rio.

“I have watched the likes of Carlin Isles and that on YouTube and they are incredibly quick,” Burns added. “It is tempting to try that sort of thing, but XVs is where it is at for me.

“We do take 7s seriously. We won the Rosslyn Park Floodlit 7s in May – we took that seriously and won the final pretty convincingly. That was tiring, but a very good tournament.

The third leg of J.P Morgan Premiership Rugby 7s will be at Allianz Park, the home of Saracens, on Saturday 3 August. For tickets and more information visit: www.jpmorgan7s.com or follow @jpmorganrugby7s