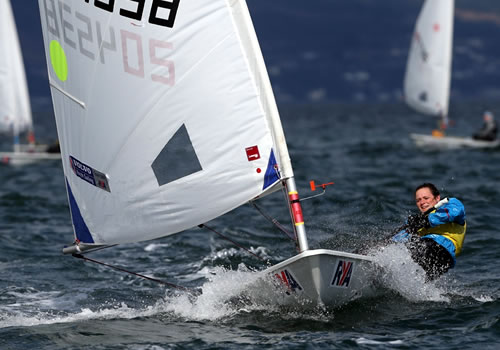 Pembrokeshire sailor Ellie Meopham admits she feels like an old head on young shoulders but it’s that seniority that could help her climb the podium at the ISAF World Youth Championships.

The 18-year-old will be one of few in the British contingent heading to Limassol, Cyprus, on behalf of the Royal Yachting Association with previous experience in the World Youth Championship environment.

The laser radial ace came fourth this time last year in Dublin, but now a year old and wiser she’s even more determined to come back with a medal.

The Fishguard Bay Yacht Club member did help Britain to the Nations Trophy title 12 months ago, and while insisting that remains a priority, individual honours will not be far away from her thoughts.

“I’m one of a handful of sailors in our team that has competed at the event before and I feel a sense of responsibility as a senior team member,” said Meopham, who will be back in the boat on Monday.

“Last year there were a number of sailors who had done it before, which for me as a newcomer, was absolutely brilliant. They set the tone for us all.

“It is a very serious event but at the same time you still have to be yourself, really enjoy it and keep your sense of humour as ultimately that will really help you when you’re on the water.

“Before we flew out to Cyprus we had a team building day in a hotel in West Sussex. The purpose of the day was just to start getting to know each other and to talk about what we wanted from each other as team members, how to function as a group and how we wanted to be defined as a team.

“There were more practical elements too like learning about the meteorology and geography of the venue and looking at physical and psychological preparation at the regatta, and often how the two are linked together.

“As a group we want to be professional, driven, have fun but do well and hopefully bring the Nations Trophy home again.”

It would seem she missed out on the excitement of the Games, but the Ysgol Bro Gwaun pupil admits her own development had to take precedence.

“I guess I’m a bit different when it comes to how the Olympics impacted on me,” she added.

“For me, as a young sportswoman, it wasn’t about being inspired by other sportspeople winning medals and wanting to follow in their footsteps, it was about realising the potential you have – in whatever it might be in life – and following the dream you’ve always had.

“It was the realisation that I am totally in control of my future, we all are, which was so empowering. I love the sailing I’m doing now but I don’t know yet if I want it to be my life.

“I liked the fact we were out there doing our own thing while the Games were going on.

“Even though we were racing 100 miles away we were out there doing a European youth version of the Olympics and you really felt you were part of that community and on that pathway. There was a really pleasing kind of connection and symmetry with it.”