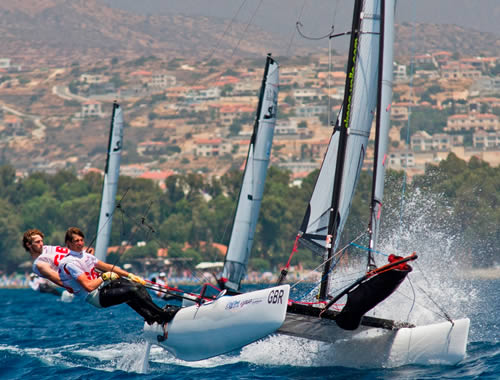 James Henson admitted to going through almost every emotion on the final day of the ISAF Youth Sailing World Championships in Cyprus – but the overriding one was elation as he and Oli Greber clinched bronze.

Helm Henson and his crew Greber took to the water in Limassol for the 13th and last time with one foot on the podium in the SL16 fleet and firmly planted both on it but not without drama.

Henson feared the worst moments after a poor start to the final race however the 18-year-old and Greber valiantly recovered during a nervy affair off the Cypriot coast to post a seventh-place finish.

That saw them finish two points ahead of Kim Vidal and Antonio Carlos Lopes Neto, the Brazilians settling for fourth, with Henson bursting with every feeling – but excitement the most.

“It’s such an incredible feeling to finish third at the ISAF Youth Worlds, the best feeling ever,” said Henson. “We thought we had lost it off the start line, but we managed to bring it back and we are so relieved – so happy, I can’t quite believe it.

“It was one of the tensest races ever; we knew all we had to do was beat the Brazilians. We tried to get them at the start, but they managed to slip through and take the lead.

“But we just kept thinking hopefully we will get a chance to get back in the game and we did, on the final downwind we took a different route and it paid off.”

While Henson and Greber were toasting bronze – Britain’s second medal after windsurfer Kieran Martin’s gold – Luke Burywood and Tim Riley and Mimi El-Khazindar and Ben Batten were both in the top 20.

El-Khazindar and Batten finished 16th overall in the 29er fleet and Burywood and Riley one behind that ranking in 17th in the boy’s 420 after final race placings of 20th and 27th respectively.

After one global gathering comes another for Burywood and Riley with the class specific 420 World Championships in Valencia next week – and the latter is determined to put into practice what he learnt in Cyprus.

“It’s a really busy summer for us now, and from here we go home for a day, then it’s over to Valencia for our 420 World Championships,” said Riley.

“With our results this week, we have been really inconsistent but we know we have what it takes to get second places.

“Our aims going forward are just to build on this week, take on board everything we have learnt and make sure we really understand as much as we can.”

Annabel Cattermole and Bryony Bennett-Lloyd will join Burywood and Riley in Valencia as part of the girls’ 420 fleet and finished the regatta in Cyprus 12th overall with a final race finish of 11th.

Ellie Meopham was 14th in curtain closer in the girls’ Laser Radial but was comfortably inside the top ten in ninth while in the boy’s equivalent Tom Williams was 31st after a final effort of 25th.

RS:X boy’s champion Martin posted his worst his finish of the week in his final outing – however, having not previously finished outside the top four, ninth was hardly a cause for disappointment.

Fellow British windsurfer and defending RS:X girls’ champion Saskia Sills, carrying illness all week and beforehand, was eighth in her last race for a valiant placing of sixth overall given the circumstances.

And, with her remarkable run of podium finishes coming to an end in Limassol, Sills insists she now knows the true meaning of the saying ‘what doesn’t kill you makes you stronger’.

“It’s been a really tough week of racing for me,” said Sills. “I haven’t been feeling great and was quite poorly at the beginning of the week so have struggled at times to keep the results consistent.

“I haven’t finished off the podium at a regatta since 2010 – so I’m really disappointed to be honest but everyone needs it every once in a while.

“And this has definitely made me hungrier and more determined to come back next year and give it another go.”