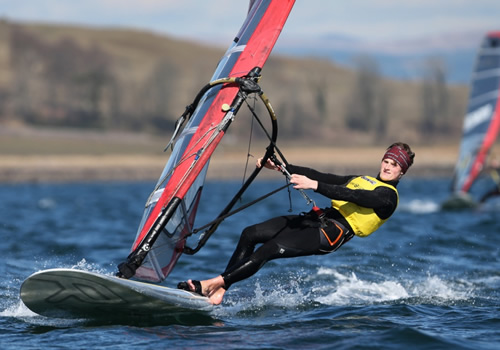 Windsurfer Kieran Martin admitted he had to pinch himself up wrapping up the ISAF Youth World Sailing Championship with a day to spare.

The 18-year-old has been in imperious form ever since arriving in Cyprus, sitting top of the rankings since Monday’s first session and not relinquishing his hold ever since.

And although there is still a day and one race to go on Friday, Martin’s rivals have no chance of catching the Denstone College pupil.

Martin wrapped up the title on Thursday as finishes of first, third and fourth handed him an unassailable 20-point lead ahead of Ukraine’s Tugaryev Oleksandr.

And Martin insists that securing the crown with 24 hours to spare was more than he could have hoped for before heading to Limassol.

“To win the regatta with a race to spare at such a massive event as the ISAF Youth Worlds is unbelievable.

“I have put together a great series and have had such a fantastic week of racing here in Cyprus – I still can’t quite believe what has happened!

“I entered Thursday’s races no different to any other day. Even though I had a nice cushion going into it, I still had a lot to do as there are so many great sailors in the fleet.

“Scoring a bullet in the first race of the day was a great confidence boost and it made the day a lot less pressurised.

“Crossing the finish line in fourth place in the last race of the day was just an incredible feeling as I knew I had won.”

Martin is no stranger to being crowned world champion, having racked up the Under-15 and Under-17 title in his short career.

And despite adding the Youth crown to an ever-increasing medal haul, Martin insists he has no intention of slowing down any time soon.

“I have been wanting this for so long and have put in so much hard work over the past few years to get to where I am now,” he added.

“It’s such a great feeling to know that all the hard work in the gym and out on the water has finally paid off and hopefully there is still more to come.”

Volvo Car UK is the title sponsor of RYA Volvo Team GBR, Britain’s sailing stars of the future and Official Car Partner to the British Sailing Team. For more information go to www.volvocars.co.uk/sailing

Ashes 2013: England’s Ian Bell pleased with century on day one