ISAF World Youth Championships: Windsurfer Kieran Martin is happy with his progress after an impressive display on day two 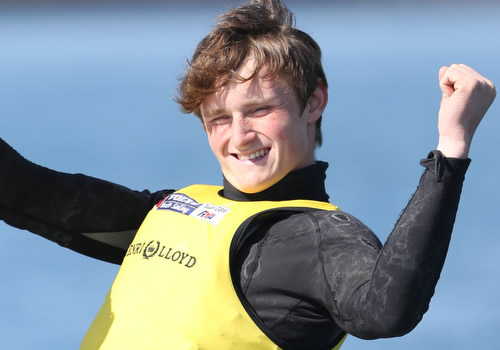 Windsurfer Kieran Martin insists he knows the ISAF Youth Sailing World Championship venue in Cyprus like the back of his hand after another blistering day on the water.

Leading the RS:X boy’s fleet after posting a first, second and third in that order during Monday’s three races in Limassol, the 18-year-old carved out an even bigger advantage a day later.

Martin claimed two wins and a second from the next set of three races to lead second-placed Radoslaw Furmanski of Poland by ten points at what is now the halfway stage for him.

Russian Evgeny Ayvazyan is another six points adrift in third with Martin confident that he has the ins and outs of the weather and conditions in Limassol down to a tee.

“My day went really well, results wise I got a first, first and a second and I feel like the event is going really well so far,” said Martin. “It’s a really nice set up here in Cyprus, the wind is really good here, it’s like clockwork really.

“In the morning you get some light winds and then around three o’clock, the wind comes in so you get some plaining in, which I like.

“I do better in the light winds but I much prefer it when its windy because it makes the racing much more fun.”

Meanwhile fellow windsurfer and defending champion in the RS:X girl’s fleet Saskia Sills insists she should not be discounted despite a tough day two – adamant she can battle her way back into contention.

Sills posted a third and two fourths for second overall after the first three races on Monday however she dropped down to sixth 24 hours later after a seventh, ninth and fifth.

Three more races follow on Wednesday, then two on Thursday and one on Friday and Sills believes that is plenty of time for her to drive back up the standings into medal contention.

“I didn’t have the best day but I did manage three top-ten results that I’m happy with,” said Sills. “And as the week goes on I’m hoping to get stronger and recover and come back fighting.”

Elsewhere British teammate James Henson concedes he and Oli Greber now face a stiff challenge to return from the Championships with a medal to declare after a tough second day in Cyprus.

Fourth overall in the SL16 fleet after day one, Henson and Greber fell to sixth also after the next set of three races produced a seventh, ninth and fifth with the former admitting they have their work cut out.

“We have had a few good races out here but we are finding it quite hard in the first half of racing so we have really got quite a bit of work to do over the next three days,” said Henson.

Elsewhere in Cyprus, it was a day of progression for Tim Riley and Luke Burywood in the boy’s 420 fleet as well as Mimi El-Khazindar and Ben Batten in the 29er.

Riley and Burywood went from 25th to 19th, El-Khazindar and Batten moved up four places to 19th also but Annabel Cattermole and Bryony Bennett-Lloyd moved down from 12th to 14th in the girls 420 fleet.

And finally Ellie Meopham and Tom Williams are 15th and 34th in the respective Laser Radial events.

Rutherford gets time as Farah and Ennis-Hill head GB team