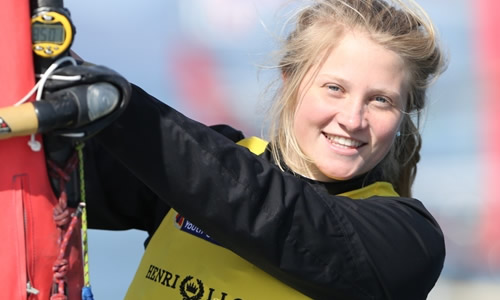 Saskia Sills in action in Cyprus

Saskia Sills finally came to the party on day three of the ISAF Youth Sailing World Championships in Cyprus and she insists she can be the one hosting it come Friday.

The 16-year-old took to the water in Limassol for the third set of three races in the girls RS:X fleet with a best finish of third from the very first race of the regatta on Monday.

However Sills, the defending girls’ RS:X champion, left the surf on Wednesday toasting a maiden win from the second race of the day with a fifth and a 23rd either side.

She still remains in sixth place in the overall standings with 38 points but is full of belief she can make inroads into leader Lu Yunxiu of China, who has 24 to her name.

“We have had three days and we have done nine races now, all in totally different conditions, and the week so far has been really tough,” said Sills.

“But day three was a really good day for me, I got a fifth and a first, which is my first race win of the competition. I’m still in sixth place but I think the points are getting closer.

“I’m going in the right direction. It is inconsistent – everybody is changing positions all the time. There are still two days left and a lot could happen. The doors wide open for anyone to win.”

Meanwhile fellow British windsurfer Kieran Martin edged ever closer to the boy’s RS:X title on day three with conditions he otherwise struggles in even proving easy in Cyprus.

The 18-year-old increased his lead at the top of the boy’s RS:X fleet for the second day running in Limassol with a third, second and fourth seeing his cushion go from ten points to 13.

Oleksandr Tugaryev of Ukraine is his nearest rival and Martin appears quietly confident after performing in heavy winds on Wednesday even though he favours lighter gales.

“I got a third, a second and a fourth, it was quite windy and I think I did quite well because I’m usually better in light winds,” said Martin. “I don’t usually do well in strong winds so to finish with three top-five positions I’m really pleased.”

Elsewhere Mimi El-Khazindar and Ben Batten were equally as consistent in the 29er fleet with a 16th, 14th and 13th to keep them on the move and up to 18th overall now.

In the boy’s 420 Tim Riley and Luke Burywood are up again to 17th and in the girls’ equivalent Annabel Cattermole and Bryony Bennett-Lloyd are back up to 12th.

Tom Williams continued the trend jumping to 31st in the boys Laser Radial, Ellie Meopham is also up to 11th in the girls’ fleet, while James Henson and Oli Greber are all set for a make or break day.

Henson and Greber enjoyed their best day of the regatta so far, recording two third-place finishes and a sixth in the SL16 fleet to move up one place to fifth overall, three points off third.

“Second and third place are looking pretty close now, the competition is really tight. We need a good day on Thursday and hopefully we can do enough to medal on Friday,” he said.

“It is definitely an improvement and hopefully we will keep improving over the next two days. It has been a good experience so far, it’s good to race at such a competitive regatta.”