Jackie Lockhart expects her son to follow her onto the ice 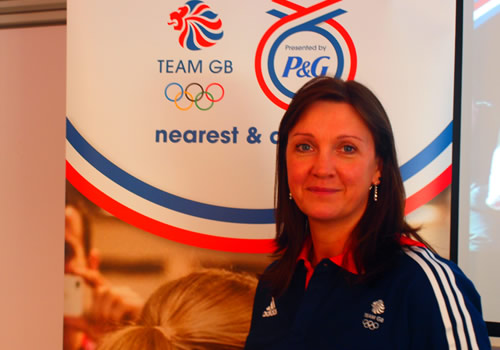 Jackie Lockhart may have hung up her broom but the former world champion curler claims her son could soon be following in her footsteps on the ice.

Stonehaven’s Lockhart was a key player in the golden year of 2002 for Scottish curling, climbing the top step of the podium at the World Championships in Bismarck as skip.

That followed the Winter Olympics in Salt Lake City where she had to watch her compatriots, skipped by Rhona Martin, secure Great Britain’s first gold medal in any sport at the Games since 1984.

Lockhart did compete in four Olympics, the final one also proving to be her last major competition in Vancouver 2010.

But she admits it may not be too long before you see the Lockhart name up in lights again, with 14-year-old Scott training with Sochi 2014 hopefuls David Murdoch and Tom Brewster at the Central Scotland Institute of Sport in Stirling.

“My kids are into curling, especially my little boy Scott, he’s 14 and I’d love to be able to follow him in the sport, hopefully he can follow on the Lockhart name,” said the 51-year-old, who was taking part in the P&G partnership with the British Olympic Association (BOA) to deliver the ‘nearest & dearest’ programme to educate families of Sochi 2014 Olympians.

“He was down here at the Scottish Institute of Sport curling camp and he was training with some of the professionals like David Murdoch and Tom Brewster, and some of the girls who have been selected in the squad for the Olympics, so he was really excited.

“He wants to be a sweeper now because he was really impressed by the boys’ guns! It’s amazing the fitness that they put into the sport nowadays.

“When I first started it was just a hobby I did, I found it strange someone saying I was an athlete, but now you are.

“I wouldn’t be pushing him towards the curling. I think he has a natural, raw talent for the game so I will encourage him to play and let him do his own thing.

“I don’t want to be a pushy parent, but I would be so chuffed if he went into it, it’s his own choice but he does like it so we’re halfway there.”

While Lockhart has been away from the ice for three years, she still took time out to speak to the families of some of the athletes hopeful of making it to Sochi as part of the nearest & dearest programme.

P&G, in partnership with the BOA, started the initiative ahead of London 2012 and it was the first of its kind in Olympic history.

It is specifically designed to support the friends and families of Team GB athletes and Lockhart believes it has great benefits.

“I would have benefitted from this about 20 years ago,” she added. “My Olympic Games have spanned over a number of years, from 1992 to 2010, and I’ve seen huge changes.

“It’s getting better and better all of the time, and the winter sports especially are catching up with the summer sports.

“It’s about setting expectations for the parents, family and friends of athletes about what they can expect when they go out there.

“When the kids go to a national championship or a world championship there’s generally not a lot of lockdown and they can generally do what you want.

“But when you go to an Olympic Games the media, the security, the accreditation – it’s just completely different and they won’t be able to see their kids as easily as they could before.”