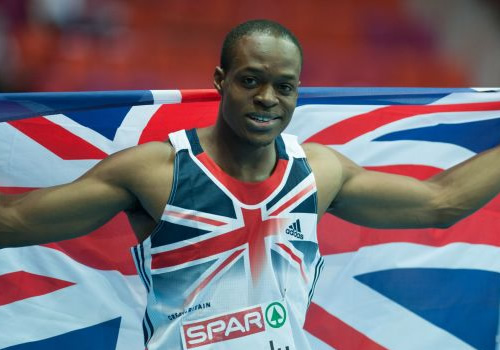 James Dasaolu insists he deserves his place among the globe’s finest sprinters this year – and he’s determined to show again why at the Sainsbury’s Anniversary Games.

Dasaolu became the second fastest Brit over 100m ever after clocking 9.91 seconds at the Sainsbury’s British Championships and now sits behind only Linford Christie, who ran 9.87 in 1993.

His time is also three hundredths of a second faster than anything six-time Olympic champion Usain Bolt has run in 2013 and makes him the third quickest clean sprinter in the world this year.

And, although the 25-year-old only made the semi-finals at London 2012 last summer, he is growing in confidence ahead of his return to the Olympic Stadium on Friday night.

“I’ve broken that sub ten-second barrier so lining up against sub-ten guys I know I belong,” said Dasaolu, who will face Bolt in the 100m at the Anniversary Games.

“That will give me confidence. I’d like to believe I can handle the pressure and I think in this kind of field I can excel as an athlete.

“This is what I work hard for every day I wake up, so I’m really happy just to be among the likes of Usain Bolt and the fastest men in the world.

“I hope I can go on and I know I’ll have to go a lot quicker to challenge him but I’m doing pretty well. It’s going to be tough race.

“He’s the quickest man ever to have lived so it’s going to be a feat to follow in his footsteps. I’ll just do my best in practice to try and compete.

“Now that I’ve gone sub ten I’m just going to give it my best and enjoy competing in front of a home crowd. I’ve been fit and healthy and able to have a full winter hence why I’ve gotten personal bests.”

Bolt returns to London for the first time since winning three Olympic golds at the 2012 Games and is relishing the chance to perform in front of British fans again.

“London was a great experience. It was different to Beijing because that’s where I won my first Olympic gold,” said Bolt.

“In London people expected me to do well and it was where I really stamped my class. I really enjoy it and it’s great to feed off the crowd at the stadium and try and run as fast as possible.

“I’ve been training for the past three weeks and going quicker than I was. It will be good to see if there is anything I need to work on going into the World Championships in Moscow.”