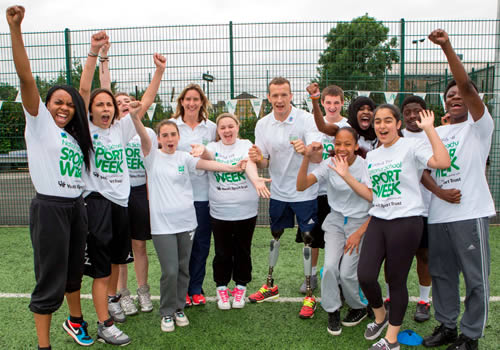 Katherine Grainger remains undecided about her sporting future but she’s tipped Helen Glover to follow her lead whatever happens.

Grainger is still deciding on her next move after taking a year out following London 2012 to complete her criminology PhD at King’s College.

But the Olympic and six-time world champion, who partnered Anna Watkins to double sculls gold last summer, believes the future is bright for those that will follow.

Stanning is taking time out from rowing to focus on her Army career – but Grainger has been impressed by Swann’s seamless transition into her seat and the fledgling pair’s podium potential.

“It is very hard to replace someone in a small boat because you are changing 50 per cent of what has gone before,” said Grainger, speaking at the launch of Lloyds TSB National School Sport Week.

“It can be very hard to change that and keep it to the high standard but these two seem to show no sign of slowing down and that is testament to both Helen and Polly.

“From Polly’s point of view she seems to fit in very well and she can’t let what has gone before get in her way. She just needs to keep her head down and work hard, which is what she seems to be doing.”

Glover admits she is finding it strange being considered the experienced rower, especially considering that five years ago she was brand new to the sport, having graduated through the successful Sporting Giants scheme.

But the 27-year old is also determined to upgrade two world silver medals at this year’s championships in Chungju, Korea in August.

“Helen wants to make this work too. She is a tremendous athlete and will keep working hard to keep being successful,” added Grainger.

“They seem to fit together really well if early results are anything to go by and they have confidence in each other which is half the battle in a small boat.

“It will be a huge boost to her because she has someone alongside who knows what she is doing, so that calms her down a bit.

“Helen has been unbeaten for some time and that is the goal moving forward. It is early days but the way they have started they look like being really good together in the pair.”

Write off Dai Greene at your peril, warns Jason Gardener