Liverpool transfers: Five midfielders who the Reds could sign this summer

Liverpool transfers: Alex Rea takes a look at five midfielders the Reds could sign instead of Dortmund-bound Henrikh Mkhitaryan 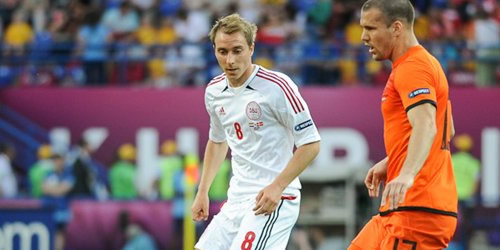 Xabi Alonso could be free to leave the Bernabeu this summer following the departure of Jose Mourinho. The Real Madrid man, who was key to Liverpool’s Champions League triumph in 2005, is certainly one transfer link that will warm the hearts of many Reds supporters but at 31, it could be difficult for Brendan Rodgers to convince the owners to part with the £10m fee that is being reported. The former Real Sociadad captain was part of a midfield trio that was among the best in the world as he formed a formidable partnership with Steven Gerrard and Javier Mascherano. However, Rafael Benítez’s desire to shake up the midfield during his time in charge saw Alonso depart the club. As a deep-lying midfielder, it is difficult to see where he would fit into the side but his passing – long and short – can unlock any defence in world football.

One target that has gone under the radar is Hellas Verona’s Jorginho. The highly-rated midfielder has long been a target of seven-time European champions AC Milan but Liverpool could be looking to steal a march with a bid of£7.7m reported to be enough to tempt Verona to part ways with their Brazilian-born star. A product of Verona’s academy, he made his debut last season and was integral in guiding his side to their first promotion into Serie A. The lack of top-flight experience is a concern but he is a player very much in the mould of the exciting Philippe Coutinho with a superb array of silky skills.

Liverpool’s hopes of adding Christian Eriksen to their ranks have been significantly boosted after Borussia Dortmund ruled themselves out of the running for the talented Dane. Currently valued at around £15m, the fee will certainly not deter Liverpool from making an enquiry for the attacking midfielder. He was apart of the Ajax team which lifted the Eredivisie title last season, scoring an impressive nine goals. The youngster has been likened to Chelsea star Eden Hazard and has been touted as a key target should Liverpool fail in their bid to sign Henrikh Mkhitaryan. The 21-year-old has always had an impressive assist record but he has steadily improved his strike-rate in the last couple of seasons to really add a new dimension to his game.

Liverpool may turn their attentions towards Newcastle United’s Hatem Ben Arfa as they look to capitalise on the maelstrom surrounding St James’ Park. Although blighted by injury problems last season, Ben Arfa did show glimpses of the explosive form that propelled Newcastle to fifth in the league two seasons ago as he helped guide the Magpies out of the drop zone. Ben Arfa could be the perfect fit for Rodgers as he scours the globe for a goal-getting attacking midfielder. His blistering pace and intricate feet could well make the Frenchman the missing piece of the puzzle.

Rodgers missed out on his top transfer target of last summer when Gylfi Sigurdsson opted to sign for Tottenham Hotspur but he could be made available after a bit-part season with Spurs. Having worked with the attacking midfielder during his loan spell at Swansea, Rodgers will be aware of his goal-scoring prowess, and in particular, his ability to carve out an assist. A specialist on set-pieces, he possesses great long-range shooting ability, however, he only managed to grab seven goals for Spurs last season. The Iceland international is a very strong and technically gifted player, and at just 23, fits the club’s buying policy.