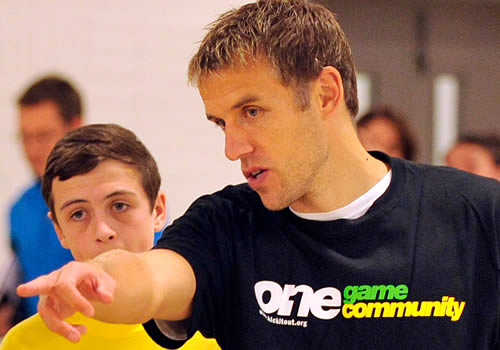 Phil Neville retired from playing football back in May Photo: Everton FC

The former Everton and United defender retired from professional football at the end of last season and is currently taking his coaching badges after spending eight years at Goodison Park.

The 36-year-old’s appointment follows the news that 39-year-old Ryan Giggs has been handed the role of player-coach at Old Trafford under new boss Moyes.

“When I retired from football, I knew that I wanted to continue in the game – it’s something that I have been preparing for over the last few years,” said Neville.

“So when David called to give me this opportunity, I couldn’t resist. I gave my all when I played for Everton but it is no secret that this club is in my heart.

“I’ve really enjoyed working with David and his staff as a player and I think that, together with Ryan, we can make a real contribution to Manchester United.”

Moyes had nothing but praise for the former England international, who worked under the Scot during his time at Everton.

“I have known and worked with Philip for eight years and, in that time, I have come to know his dedication, ability to lead and appetite for hard work,” said Moyes.

“In addition, of course, he understands the club very well and I think his addition to the coaching staff will be a valuable one.”

Chelsea transfers: Hulk happy to stay at Zenit despite speculation

Chelsea transfers: Bruma set for talks about his future