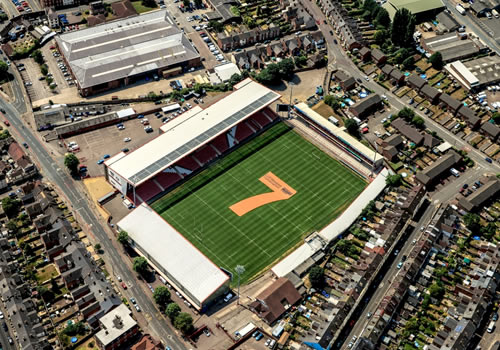 With the Rio Olympics now in view, 7s has never been bigger – and that is certainly the case for the JP Morgan Asset Management Premiership Rugby 7s Series, with this year’s edition kicking off on 1 August at Gloucester’s home ground Kingsholm.

And to mark this occasion a giant orange seven measuring a staggering 23 metres in width by 49 metres in length was unveiled at the club’s ground today to signal the countdown to the start of the tournament.

With all 12 Premiership Rugby clubs split across three regional rounds, the opening group of the tournament sees Gloucester Rugby, Bath Rugby, Exeter Chiefs and Worcester Warriors battling it out for a place in the Series Final at the Rec on 9 August.

The series then moves to Northampton’s Franklin’s Gardens on the evening of 2 August for group B, which is made up of Northampton Saints, Leicester Tigers, Newcastle Falcons and Sale Sharks.

Completing the group stages on 3 August at Saracens’ Allianz Park; Harlequins, holders London Irish and London Wasps will take on the hosts for a place in the final.

Former England captain Lawrence Dallaglio and new rugby expert for BT Sport which will be showing the series live, knows a thing or two about how important 7s is, having won the inaugural Rugby World Cup 7s in 1993 – and he admits he can’t wait for this year’s competition to get under way.

“The JP Morgan Asset Management Premiership Rugby 7s is really the start of the season and it covers the opening few weekends and starts the coverage of BT Sport,” Dallaglio said.

“7s is becoming such a massive sport. We have just had the Rugby 7s World Cup and we have 7s coming into the Olympic Games in 2016 and it has really been growing. “We heard from some of the stars of the JP Morgan Premiership Rugby 7s tournament with the likes of Tom Homer who played for London Irish in the final, Matt Banahan who played for Bath, Tom Varndell who could feature for London Wasps and it will be very interesting.

“The only thing that is the same in the game of 7s since I played in the 1993 Rugby World Cup 7s is that there are seven players on the pitch. It is a much more dynamic and explosive game and one you are far better off watching than playing.

“I have always been a fan of 7s, particularly in the early stages of your career as it is a real development game and it is really growing across the world.”

The home fans packing out Kingsholm a week today will be hoping to see their Cherry & Whites victorious after losing last year’s final 31-28 to London Irish.

Jonny May sat out that thrilling defeat through injury but is chomping at the bit to make amends 12 months on.

“I really want to play, I think all those that took part last season want to go again,” May said.

“Those that didn’t play felt they missed out, and I was gutted to miss out in the final at The Rec with a dead leg.

“But it was a perfect night in the group stages at Kingsholm, we won three from three and a bit of revenge would be nice this time around if we get to another final.”

The JP Morgan Premiership Rugby 7s starts on 1 August at Gloucester with rounds at Franklin’s Gardens, Allianz Park with the final at The Rec, Bath. For tickets and more information visit: www.jpmorgan7s.com or follow @jpmorganrugby7s