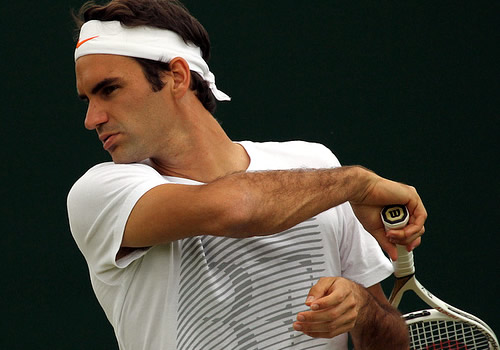 The start of the second half of the tennis year is marked by change: from high-octane action to welcome relaxation; from clay and grass back to clay or hard courts; from high summer towards glowing autumn.

After a frenetic crescendo through the most glamorous venues of Europe, after two months packed with clay from the Monte Carlo Masters, through Madrid to the Rome Masters, the terracotta season climaxes at Roland Garros.

But unlike every other Grand Slam, the crowning of the French Open champion does not herald rest and recuperation. It becomes instead the launch-pad for the next Major challenge, on an altogether difference surface, just a fortnight down the road. Indeed the first day of grass—at London’s Queen’s or Germany’s Halle—follows the last day on Paris’s clay.

Now, though, the All England Club has wound down the media storm, packed away the Centre Court seats, and dismantled the most prestigious of tournaments until next year: It is time to take breath, take stock, take a break.

And yet…there they are, those athletes of the tennis tour, back to work, readying themselves for 2013 Part 2, the hard-court swing that pounds its way towards New York, and thence the indoor swing that runs headlong to the year’s showstopper at the World Tour Finals.

It is rare, though, to find the elite players already back in harness before the rigours of the US Open Series double-headed Masters: Montreal four weeks hence, followed by Cincinnati and, within days, Flushing Meadows.

This year, however, is rather different. Lined up among the men ranked outside the rarefied air of the top 10, among those who enjoy a brief sojourn back on Europe’s clay to stockpile some ranking points and ease their way to the unforgiving hard-courts, is a very rare presence indeed.

Roger Federer has not played a clay-court tournament after Wimbledon since he won the title at the Swiss Open in Gstaad in 2004. Indeed he has not played any tournament between Wimbledon and the first hard-court Masters in August since 2004 except last year’s Olympics and a single Davis Cup match in 2011.

For this has traditionally been a sacrosanct phase of the Federer schedule given over to holiday, recuperation and a mid-season training block. That schedule was blown out of the water by London 2012, and he went on to pull out of the Rogers Cup in August and later the Paris Masters in October.

So when his 2013 schedule was announced, he wanted to compensate with some significant changes.

The first excision was his habitual season warm-up, Doha, but the most high-profile came in March as he by-passed the Miami Masters. The clue to Federer’s thinking had come loud and clear at his last news conference of 2012 at the World Tour Finals: “I haven’t really set clear goals yet for next year.

“I first have to make sure I create my schedule so it makes sense for my practice schedule. I need to practise a whole lot more next year, because this year, I hardly had an opportunity to do so. I have some catching up to do in that standpoint. Then I’ll see what’s most important to me and the team, then I’ll go from there.”

The back-to-back Masters of March always make a demanding stretch, and with few points to defend in Florida, Federer chose to recuperate, train and prepare his game for long haul through the clay and grass seasons.

But while this reaped some rewards—the final in Rome and his first title of the year in Halle—it also saw some inconsistent performances that led to earlier-than-expected losses: to Kei Nishikori in Madrid, to Jo-Wilfried Tsonga in the quarters of Roland Garros, and finally the biggest surprise of all, a second-round loss to Sergiy Stakhovsky at Wimbledon.

In amongst the usual Federer pragmatism in the media room was palpable disappointment: “Losing at Wimbledon always has been that way, will never change. So just got to get over this one. Some haven’t hurt this much, that’s for sure.”

But he was also disappointed that things had not panned out according to plan: “Right now, this is a setback, a disappointment, whatever you want to call it…I didn’t play so much as of late [but] that gives me more flexibility with my schedule moving forward, and next year as well.

“An early loss like this gives me extra days to rest. I have more options now than I did have one year ago when I was running around trying to chase down every possible tournament and every point to get back to world No1. Maybe that, with the Olympics last year, took its toll: I don’t know.”

His reference to the No1 ranking was significant: He regained the top spot here last year after winning four titles on his way to the Wimbledon trophy itself. And perhaps he already knew that, with his earliest exit from the All England Club since 2002, he would fall out of the top four for the first time since winning his debut Wimbledon title exactly a decade before.

Federer would normally have planned a period of recovery from a run to the second week of Wimbledon, in preparation for the hard court season ahead. But with time on his hands—and maybe that ranking on his mind—he instead re-jigged his schedule to become the headline player during the summer’s short clay recapitulation.

Hot on the heels of his announcement about Gstaad came another: That he would return to competition even sooner, at the Hamburg 500 next week.

Federer enjoyed a lot of success at Hamburg when it was still a Masters event in the slot now taken by Madrid during the French Open build-up. He won his first Masters title there in 2002, with repeats in 2004, 2005 and 2007. The last time he played was in its last year as a Masters event, in 2008, and he was runner-up to Rafael Nadal. Overall then, he has a 29-4 record there—yet it is still an unexpected step on Federer’s part to opt into the brief clay ‘swing’.

He will find himself in the company of some tough competition, too, with many strong players keen to make hay while the sun shines on clay for the last time in 2013.

New No11, Tommy Haas—playing as top seed in Stuttgart this week—will be there. No16 Nicolas Almagro, No20 Juan Monaco, No29 Grigor Dimitrov and, fresh from his semi finish at Wimbledon, new No17 Jerzy Janowicz, will be there. No18 Gilles Simon, No23 Andreas Seppi and No24 Alexandr Dolgopolov are involved—as are confident risers Bernard Tomic, Ernests Gulbis and Fernando Verdasco.

The following week in Gstaad, Federer will find the new No10 Stan Wawrinka, along with Monaco, Benoit Paire, Feliciano Lopez and Halle finalist Mikhail Youzhny.

So if Federer is to accumulate points, along with the confidence that comes from match-honed form, he will need to hit the clay strongly against opponents who are already adapting to the surface this week, if not in Stuttgart then in Bastad.

The good news is that he will not have to face his fellow top five before Montreal’s hard courts, as not one of Andy Murray, Novak Djokovic, David Ferrer and Nadal is showing his face either on Europe’s clay nor North America’s hard courts.

Meanwhile, those just behind Federer are following different routes: Juan Martin del Potro is not playing until Canada, Tomas Berdych is in Bastad this week, Richard Gasquet is scheduled for Umag, and Tsonga is due to play in Washington at the end of July.

The other good news, as Federer stressed at Wimbledon, is that he is fit and should have plenty left in his legs as he attempts to build his results in the second half of 2013 and seal his place at the World Tour Finals:

“I’ve been playing OK, you know. I’m healthy again, which is a good thing: I’m happy about that. I’m not playing every other tournament with some issues. So I’m looking forward to playing hopefully injury-free for the rest of the season, then we’ll go from there.”

It’s certainly a fresh approach from the man who will turn 32 next month, and one which demonstrates his competitive spirit is as keen as ever.

Read more: ATP Tour summer schedule: who, when and where

ATP Tour summer schedule: who, when and where