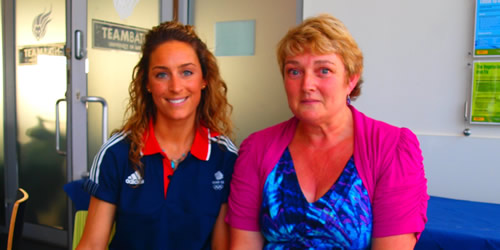 The Olympic hopes of Blackburn bobsledder Paula Walker largely depend on how she recovers from a knee injury sustained last season, but mum Denise insists if anyone has proved they can overcome adversity it is her daughter.

Pilot Walker faces a race against time to be fit for Sochi 2014 but alongside brakewomen Gillian Cooke represents a real medal hope for Team GB, considering the pair were on course for their first World Cup podium finish in January before crashing in their second run.

The 27-year-old left home aged just 16 to join the armed forces and first came across the sport back in 2006, since which she has gone on to become junior world champion back in 2011.

Sadly, however, dad Paul passed away that same year, making Walker’s performance that much more special given the circumstances.

And her mother Denise, who was taking part in the P&G partnership with the British Olympic Association (BOA) to deliver the ‘nearest & dearest’ programme to educate families of Sochi 2014 Olympians, believes having seen how her daughter has proved she can perform even in the worst of circumstances, she can come back and put in a stellar performance in Russia.

“I didn’t get to see her win her gold medal because her dad was poorly at the time and unfortunately we lost him that year but I swear she won that medal for him,” said 52-year-old Denise, who attended the nearest & dearest of athletes to roadshow in Bath, where she was offered guidance and support, as well as being able to meet up with other nearest & dearest Team GB members like 2010 Vancouver gold medallist Amy Williams.

“It was amazing what she did. Sometimes with sports people what is going on upstairs can affect them and under the circumstances she was able to channel all the negativity to a positive and used it to fuel her.

“I don’t know how she managed to cope with it because to lose your mum or dad no matter how old you are you do feel a little bit orphaned and she was absolutely brilliant.

“You give her a problem or if something comes up with a curve ball instead of getting worried she tries to turn it into what positives there are and she just gets on with it.

“She left home at 16 to join the army and she has never looked back. She has been in the sport for about seven years now, was a junior world champion and is doing great.

“As a mum seeing her go at 16, she was still a baby to me but she is a very disciplined, organised and go-getter kind of girl and she really is an inspiration.”

Walker has already had the experience of competing in a Winter Olympics after she competed in Vancouver in 2010, finishing 11th in the two-woman event.

And providing she qualifies for the showpiece next year her mum will be there to support her – being part of a journey she can’t wait to experience as a family.

“I am going to Sochi to support her this time. I didn’t get to see her in Vancouver back in 2010 when she was lucky enough to get there and with the expectation at least she will have her mum this time,” she added.

“She doesn’t discuss the Olympics too much with me but she is always so hard on herself and competitive which she got from her dad’s side and strives to always improve.”